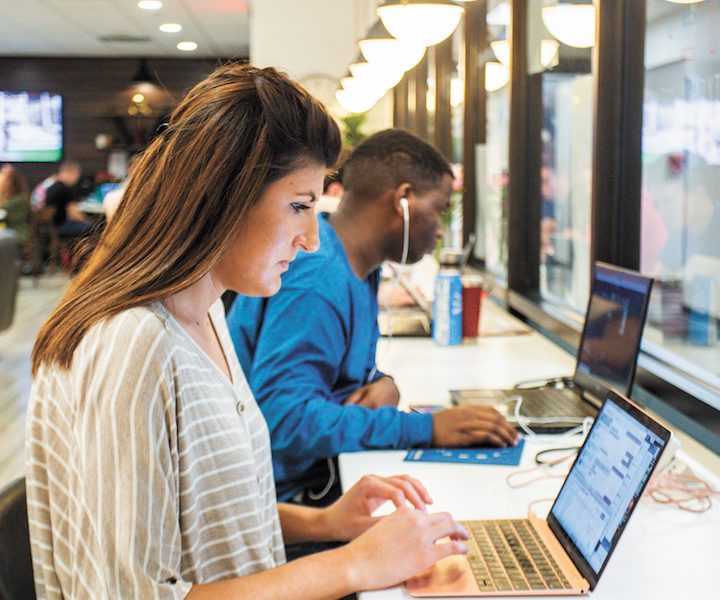 Entrepreneur: one who organizes, manages, and assumes the risks of a business or enterprise. —Merriam-Webster

While authors are not typically thought of as entrepreneurs, many are self-started and self-supported, offering their stories as their products to the public.

After reading a book about the Holocaust soon after graduating high school, senior journalism student Taryn Azimov traveled to Jordan in 2016 to spend a gap year serving Syrian refugees in whatever way God had for her.

Her host family organized a knitting club for local women to find community, and Azimov joined. Through that experience she began to get to know Syrian refugee women living in the area.

“That year in Jordan was the best and the hardest year because I witnessed some amazing things as well as the hardships of writing some really tough stories,” Azimov said.

Through all of Azimov’s experiences in Jordan and writing stories of refugee women, she wanted to continue writing, leading her to study journalism at Liberty University.

“There’s a story inside everybody that’s just waiting to be told.”

Kyle Vatt, a senior Liberty student, does not exactly know what the ending of his book will be, but he knows the phrase above will be the first sentence.

The title of his work in progress is “Bears and Lions.” The idea for the project came to Vatt while reading through the familiar story of David and Goliath. One thing he noticed was that when David initially asked Saul if he could fight Goliath, Saul said ‘No.’ This fact kept rolling around in Vatt’s brain.

The idea kept coming up as Vatt continued to study his Bible. In late summer 2017, it “just clicked all of (a) sudden.”

Although many people consider the giants in their lives to be cancer or unexpected tragedy, Vatt considers these obstacles to be the bears and lions, building the strength and resilience needed to defeat giants in the future.

“The giants are the ones where we actually go to God and ask permission to take (them) down,” Vatt said.

As a third-grader, Deanna Drogan’s love of writing ignited when her teacher assigned creative writing assignments.

Today, her dream is to become a Christian author.

In 2018, Eric Koester, entrepreneurship professor at Georgetown University and CEO of Creators Institute, reached out to Drogan though LinkedIn with the proposition of bringing Creators, a program designed to publish college-aged writers, to Liberty University.

“At first I thought it was a scam,” Drogan said.

But it was not.

The program encourages writers to write about their career goals and provides support and encouragement for the journey.

Drogan’s book hopes to encourage aspiring authors. The running title is “Writing for an Audience of One.” For Drogan, interviewing Christian authors such as Qené Manon Jeffers and Lisa Whittle was her favorite part of the project.

Her goal for the book is to motivate future Christian authors.

“Writing Christian content is so much different than writing regular content because there’s so much inspiration that goes into it,” Drogan said. “It’s really a life-changing experience to write anything like that because you’re gaining this insight from the Lord.”

When she looks down at her copy to find something she could have never thought of on her own, she knows that it is from God.

“If you’re doing it correctly, there really is a one-on-one experience with you and God,” Drogan said.

Drogan does not have to wonder what her purpose is.

“I think everyone has these passions that God has given them that God speaks to them directly through, and I think writing is that for me,” Drogan said.

At the beginning of the semester, Caroline Pearce’s history capstone professor asked the question, “Why do we study history?” Her classmate replied, “We study history to tell stories so they’re not forgotten.”

Pearce’s goal is to tell the forgotten stories of American women who played important roles in important American events.

She started making a list of the women she wanted to include, just in case she ever decided to move forward with her idea. When Pearce ran across a post from Drogan on Facebook about Creators in December 2018, she knew that her dream would soon become a reality.

“I feel like God was leading me to this for a couple of years now, before I ever heard of Creators,” Pearce said. “I had this idea for a while, and I was randomly finding these women that I’ve never heard of that had these really interesting stories that I just felt like most people don’t know.”

While Azimov is already published, Vatt, Drogan and Pearce are on the path to publishing their stories. Their passion for those stories drives them to push through the challenges of being an entrepreneur. The reward will one day be a book cover with their name on it.