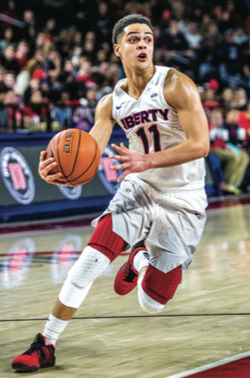 The Liberty Flames men’s basketball team (1-0) began its season with an 81-53 win against the Cairn Highlanders (0-1) Friday, Nov. 11 in the Vines Center.

The Flames never trailed, leading by as many as 28 points during the game.

Flames seniors John Dawson and Ray Chen led the way for the Flames with 15 points and 14 points respectively.

The senior guards led a balanced scoring attack for the Flames against the Highlanders.  The Flames used effective ball movement and aggressiveness to outscore the Highlanders in both halves by double digits.  Thirteen of the Flames’ 15 players saw playing time with 11 players ending up in the scoring column.

The Flames finished with 21 assists — more than double the Highlanders’ nine assists.  Six different Flames hit a 3 point shot in the game.

The Flames defense held steadily across both halves allowing 26 points in the first and 27 in the second.  The Highlanders were led in scoring by Zachary Dolton with 29 points, including 19 in the first half.

Liberty Head Coach Ritchie McKay said that he was not completely satisfied with his team’s defensive effort in the game.

“Defensively, I was upset a time or two on the sidelines,” McKay said. “We let them get into the lane too easily, and we let their hot hand get open and easy looks, but I think we did a better job in the second half.”

McKay spoke after the game about the improved balance of this year’s team compared to last year’s team.

“I think one major difference for us is depth,” McKay said. “We’ve got a lot of guys who can play, and although young and still inexperienced, I think we have a lot of options.”

Dawson said he was excited for the start of the season and getting back to playing basketball.

“I felt really comfortable out there,” Dawson said.  “I loved getting back to playing basketball and competing against people who are not on my team and going at other players.”

Dawson said having a four-man rotation of big men will help the team and add to team balance and depth.

“Last year we had one big man and the rest of the guys were really guards,” Dawson said.  “This year we have four big men and can rotate, and our big men are not just big men. They are really mobile.  That helps us match up a lot better with other teams.” 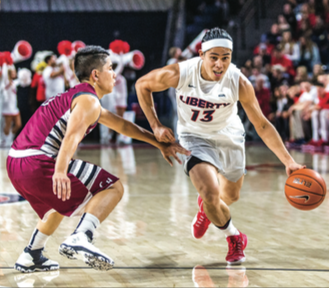 Dawson said that along with team balance, team chemistry will be a huge part of the Flames success this year.

“We all live on the same hall,” Dawson said. “We’re with each other 24/7, and we get to know each other so well. We start to learn where every guy wants the ball, whether someone will pass or shoot the ball and our tendencies. It puts faith and trust in one another when a relationship outside of basketball is built.”

McKay said he enjoys the atmosphere around his team, and it will translate to the way they play on the court.

“Our guys are working really hard,” McKay said. “They’re really fun to coach, and I think we’re fun to watch too.”

The VCU Rams beat the Flames last year in Richmond, 85-57.

Dawson said he hopes to improve on the negative experience of last year’s game and come out with a better effort Tuesday.

“They put it on us last year,” Dawson said. “It’s kind of like a nightmare replaying in my head as I think about it, but this Tuesday I’m hoping to turn it into a good dream and come out on top.  We just have to worry about what we can control and not worry about other external factors.”

The Flames have a tough upcoming non-conference schedule as they face in-state foe VCU on Tuesday, Nov. 15 as well as Indiana Saturday, Nov. 20.