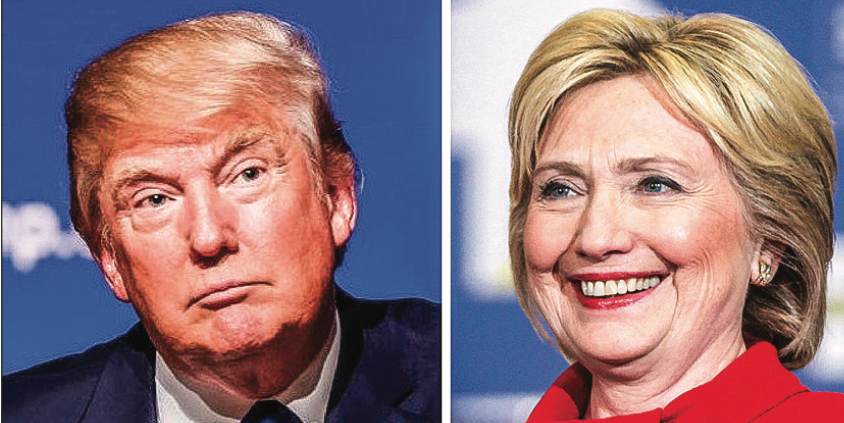 Candidates square off in the first presidential debate

I’ve never witnessed a trainwreck, but I imagine it would look something like the 2016 election.

On Monday, Sept. 26, America watched as its only real options for the presidency took the stage to “debate” the “issues.” That’s a comical and mildly generous description of what occurred.

As is typical of nearly every debate I’ve witnessed, the candidates danced around the issues and tried to convince their constituents that they aren’t all that awful after all.

In fact, the greatest part of it all was probably the memes of her reactions to the Donald throughout the night. We’ll call them “The many faces of Hillary”.

Overall, nothing Clinton said or did was out of the ordinary, which is pretty ordinary for a career politician like herself.

If anything, I would credit Clinton’s composure as she was interrupted by Trump 51 times, according to PBS.

Which brings us to the candidate with the best temperament, Donald Trump. That isn’t a title I made up.

It’s a claim he actually made as he continued to raise his voice, once again showing just how disruptive he can be.

Composure is not even remotely close to any of the words that come to mind when Trump is mentioned.

But that was not his biggest flop of the night.

My personal favorite was his praise of the stop-and-frisk laws, which were implemented in 1968. According to factcheck.org, in 2013 a U.S. judge ruled that New York’s enforcement of the policy was, in fact, in violation of the Constitution. Maybe he missed that part.

Yes, given the current racial climate of this country, Donald “The Gift That Keeps on Giving” Trump decided to voice his support of the great stop-and-frisk law that made profiling a policy.

That just doesn’t seem too smart.

Following their performances Monday evening, we learned nothing new about these candidates.

The first presidential debate didn’t give me anything new to work with as a voter.

It seemed like both candidates were able to avoid promoting any real policies.

This election just feels different. The hope and optimism that usually comes with this season isn’t there.

On Nov. 9, we’re either going to wake up to business as usual or in fear of what will happen.

It’s tragic and unnerving, but I can’t look away.

The vice presidential debate will take place Oct. 4 at Longwood University in Farmville, Virginia, giving the nation the opportunity to see where Gov. Mike Pence and Virginia Sen. Tim Kaine stand on the issues.

According to IN.gov, Pence has experience in law, policy and small business.

Some of his accomplishments since he began his term in 2013 have included Indiana’s largest state tax cut and an $800 million investment in state infrastructure.

He previously served in Congress.

According to Kaine’s personal website, he has also served as a lieutenant governor, senator and mayor.

Since joining the Senate in 2012, Kaine has served on several committees, including Armed Services, Budget and Foreign Relations and Aging.

Though Clinton and Trump have given everyone an earful, those tuning into the debate will get the opportunity to get to know the other side of their campaigns. Compared to previous elections, it seems as though the VP candidates have taken a backseat.

According to Politico, the 2008 debate between former Sen. Joe Biden and former Alaska Gov. Sarah Palin drew record breaking numbers, with 69.9 million tuning in, according to Nielson Ratings.

We have yet to see Pence or Kaine on Saturday Night Live, but there’s still time.

Carter is the opinion editor.