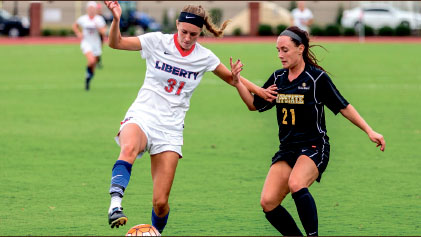 Despite conceding two goals in the first 18 minutes, the Lady Flames soccer team (1-3-0) rallied past the Appalachian State Mountaineers (3-2-0) for their first victory of the season with a final score of 3-2. 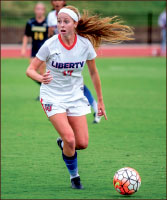 The tempo was set by redshirt senior goalie Holly Van Noord, who recorded eight saves including a one-on-one save against Appalachian State’s quick senior forward Jane Cline, who accounted for both of the Mountaineer goals in the first 19 minutes of play.

“I had adrenaline going,” Van Noord said. “I just knew I had to do everything I can to stop the ball and thankfully it went in my favor.”
Van Noord leads the conference in saves with 25 on the season, according to the Liberty Athletics website.

The Flames’ first goal of the season was netted by junior forward Isabella Habuda, with the assist coming from freshman forward Sierra Lam.

The whole team collectively displayed relief when the ball finally reached the back of the net after going scoreless in its first three games.

The game-winning goal was rebounded in by junior forward Sami Santos in the 55th minute.

“It was pretty exciting,” Santos said. “At that point, I felt we were dominating, so we were all anticipating a goal.”

The win was significant for new Head Coach Nate Norman, who earned his first victory at the helm of the Lady Flames program.

“The first win, I think, is always important,” Norman said. “We played well in a number of the games so far, and if you don’t get the results, you start to doubt yourself, even if you’re doing the right things. We play a result-driven sport, and there’s not really moral victories. I think a lot of the hard work these ladies have put in paid off. I was proud of them.”

Going into the game, the Lady Flames were only outshot 43-44 by their opponents, according to Libertyflames.com.

“We needed this win, honestly, because our record hasn’t been good,” Santos said. “It’s definitely a confidence-builder for us.”

Van Noord, who holds the Lady Flames record for most shutouts in a season with 14 (set in 2013), helped keep the team focused when they trailed early in the game.

“I think we definitely needed this one,” Van Noord said. “For a boost of confidence and to finally see the results. Because in the past we’ve played well and should’ve won a few of the games, so it was nice that it finally clicked and we put it in the back of the net.”

The team is still looking to progress and keep improving.

“We can still grow in a lot of ways, defensively, we can be sharper,” Norman said. “We’ve had a lot of players back on the back line that aren’t used to it, so it’s great to see them battle against a good team.”

Van Noord and the rest of the Lady Flames are hungry for more.

“I don’t think anyone is satisfied with where we’re at right now,” Van Noord said. “We definitely have room for improvement, we want to get everyone on that page to see how we can get better.”

Davis is a sports reporter.