Getting a fresh start 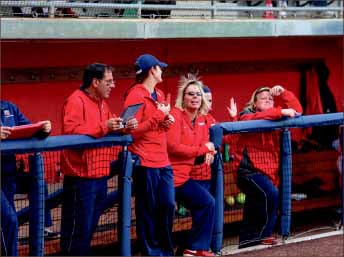 The Lady Flames softball team is looking to have its best season with Coach Dot Richardson at the helm.

Richardson, now in her third year as head coach of Liberty’s program, saw her team win 18 more games in her second season than her first.

“This team is a lot younger, and this team has a lot of talent,” Richardson said. “We’re going to have a lot of ups and downs because of youth and getting experience, but I see a lot more consistency as we start getting into our conference play.”

There are 12 new freshman and seven sophomores compared to the five upperclassmen on the team. According to Richardson, youth will be both the biggest strength and weakness of the team.

“When you look at the underclassmen who are taking the lead and growing up quickly, you’re going to see a great future for our program because of that,” Richardson said. “They’ve been playing softball for almost all of their lives, yet when you get to division one and you put the Liberty uniform on, it’s a different ballgame.”

One of the freshmen is Jaclyn Amader, who was ranked the number one recruit in the nation according to the OnDeck Softball National Leader Board. The outfielder has seen no problems adjusting to the collegiate level of softball.

“I’ve been playing softball for 13 years, so I’m not worried about playing the game,” Amader said. “I’ve just got to stay strong mentally and trust my teammates.”

An essence of family on the team is helping the young players mesh with the rest of the team.

“We all have really outgoing personalities and (are) always trying to have fun,” Amader said. “The older girls push us and keep us in check. The program is going big places, and it’s awesome to have so much potential (being) so young.”

A vast amount of challenges await the Lady Flames this season. On the schedule for the 2016 season are Alabama and LSU, who both competed in last year’s Women’s College World Series, along with UCF and Baylor, two 2015 NCAA Regional Finalists.

For Richardson, there is a method to her scheduling madness.

“When we get to the postseason I don’t want our players with their skill to not have experienced those jitters and excitement of playing teams that have been ranked really high,” Richardson said.

Coaches from across the Big South picked Liberty to finish fourth in the conference, the same exact place they found themselves in at the end of last season.

Tabbed to finish first is Longwood, second is Coastal Carolina, and third is Charleston Southern, respectively.

When asked if the pre-season rankings were right, Amader was confident those predictions are inaccurate.

When asked the same question, Richardson said her focus is game to game.

“Talk is cheap, it’s a matter of doing it,” Richardson said. “Liberty softball has not made it (yet), but I tell you we are making it.”

With so much young talent on the team, the aura surrounding the program is one of positivity. With only one senior scheduled to be in the starting lineup, the bulk of the team will have many years together to gel into a cohesive unit.

Richardson said this season is one that will be filled with highs and lows because of the learning curve of competing at the division one level. Looking beyond physical wins and losses, she said she will be happy if every individual player can step off of the field and say that she gave it her all in every way possible.

“The heart of a champion is to be able to want it more, be hungry, know what you want and seize the moment, those are the standards that I’m looking for,” Richardson said. “We have some work to do, but I tell you they’re getting better.”

KEATING is a sports reporter.