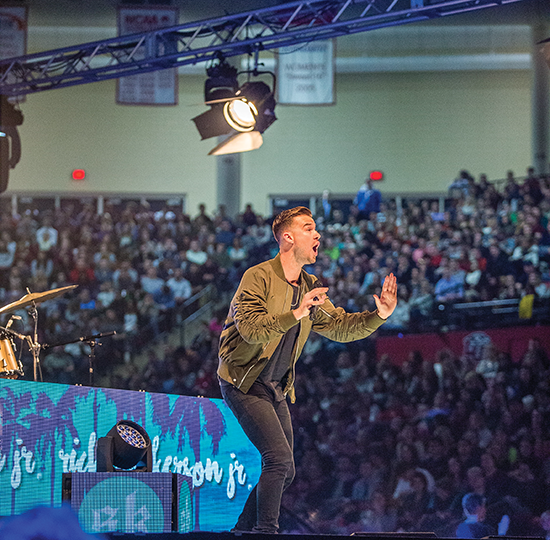 Disciple — Pastor Rich Wilkerson shared some of his personal church-planting story while preaching to thousands of students at Convocation. Leah Seavers

Pastor Rich Wilkerson Jr. challenged Liberty University students to “bring people that are far from God, close to him” on Wednesday, Jan. 20 at Convocation, where he spoke and held a book-signing event. His passionate charge is also the mission statement of the Vous, Wilkerson’s Miami-based church, whose hip and relational style he represented this week at Liberty.

“God is obsessed with lost things,” Wilkerson said, urging students in attendance to “invade dark spaces” as they pursue and lead ministries of their own. 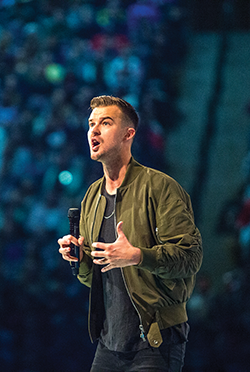 Wilkerson, 31, and his wife DawnCheré are both pastors at Vous church, a congregation that currently meets at a Miami middle school. The church began in 2007 as a mid-week worship service called “The Rendezvous” through Trinity Church in Miami. “Rendezvous” has since burgeoned into the present Miami church Vous, which is still in the planting stage,
according to Wilkerson.

Wilkerson made headlines in 2014 when he officiated the wedding of recording artist Kanye West and reality television icon Kim Kardashian. Amid scrutiny concerning his celebrity connections and status, Wilkerson holds that the central theme of his preaching is that everyone is “worth Jesus to God” and should be pursued as such.

Wilkerson more recently made waves when he and his wife agreed to star in their own reality television show called “Rich in Faith” through Oxygen Media. Wilkerson considers the show, which premiered last month, to be another outlet of his ministry.

“We’re not in it to write books or do shows,” Wilkerson said. “We’re in it to build a church. We’re in it to see people change. The show’s just another avenue to encourage people.”

Wilkerson acknowledged a challenge of nonconformity within any kind of ministry. Concerning his own ministry in Miami, Wilkerson maintained that while making disciples means getting into difficult situations, he stays grounded through his
own local church family.

“For me, being in local churches has always been my salvation, because I’ve got enough normal people around me all the time,” Wilkerson said.

A highlight during Wilkerson’s address to Liberty students garnered the “That’s good!” and “Amen!” shoutouts he encouraged in his introduction. Referring to the biblical story of the prodigal son in the book of Luke, Wilkerson used the resentful older brother in the story as a “picture of religion” in the face of grace. He applied it to his charge for students to strive more for relationships than judgment in ministry and discipleship.

“Relationship comes first (and) love comes first,” Wilkerson clarified as he signed copies of his new book, “Sandcastle Kings,” after Convocation. “To look at somebody you don’t know or have a relationship with and say, ‘You’re not a disciple,’ that’s not really the Jesus model. Jesus did life with guys, corrected them in private most of the time, celebrated them, ate meals with them and did a whole lot of life. I think discipleship is less about a course or a class. It’s more about a way of life.”