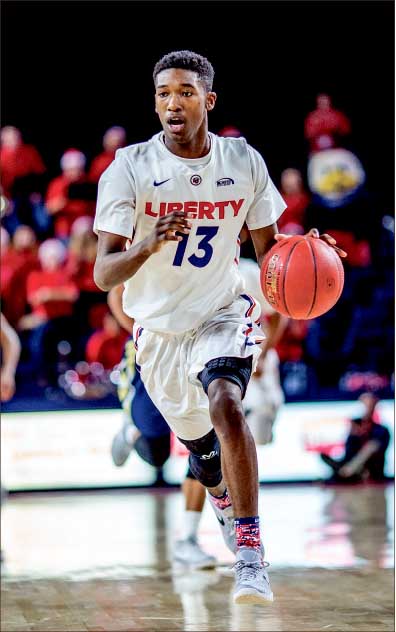 After storming back from an early double-digit deficit, the Liberty Flames men’s basketball team (2-6, 0-2 BSC) dropped another game to a Big South opponent, as they fell to the Charleston Southern Buccaneers, 68-61, Saturday, Dec. 6.

Leadership — Freshman guard Lovell Cabbil had an off game but continues to be a main factor. Photo credit: Leah Seavers

After winning the opening tip, birthday boy and sophomore center Evan Maxwell, picked up where he left off after his 24-point and 12-rebound performance just two days prior, by pulling in an offensive rebound and putting back up to open scoring for the game.

Despite the Flames getting on the board first, it was the Buccaneers who asserted their dominance early on. Immediately after Maxwell’s basket, CSU got the ball into junior guard Patrick Wallace’s hands. Wallace instantly delivered, nailing a three pointer and giving the Buccaneers the 3-2 lead. As the Flames tried to inbound the basketball after the made shot, Wallace intercepted an errant inbound pass and hit senior forward Aaron Wheeler for the easy layup.

After Flames sophomore forward A.C. Reid hit one of two free throws, the Bucs strung together a nearly identical series of events. Wallace drove through the Flames defense and found freshman guard Armel Potter for another wide open three. Flames freshman guard Lovell Cabbil continued to struggle inbounding the ball as CSU overwhelmed the Flames with a stifling full-court press.

“We knew (the press) was coming,” sophomore forward A.C. Reid said. “We just didn’t do a good job against it.”

Cabbil’s pass was intercepted for the second time. Similar to the first time, it led to an easy basket for the Buccaneers as redshirt junior forward knocked down a three point shot of his own.

Down 11-3 around three minutes in, the Flames looked to their No. 1 option on offense, Maxwell. The 6-foot-10-inch big man was instantly double teamed as soon as the ball hit his hands.

However, he found an open Reid behind the arc who took care of the rest, cutting the lead to five.

Wallace apparently did not take too kindly to that and went on a scoring tear. He decimated Liberty’s defense as he nailed his next three shots, all of which were threes.

During Wallace’s offensive tirade, the Flames could not buy a basket, going scoreless for six minutes, when Reid made another three.

Down 25-9 with eight minutes remaining, Reid ended the scoring drought with another three pointer. But the Buccaneers once again, answered with a three of their own.

Down 16, it became Reid’s turn to showoff his offensive prowess. A quick pair of threes and a steal leading to a fastbreak layup halved the deficit in just two minutes.

The sophomore out of Texas reignited the seemingly doused Flames, sparking a 18-0 run, eventually taking a two point lead against the boys from Charleston, the first lead since Maxwell’s opening tip. He finished with a game high and season high 18 points.

CSU finished the half in the most fitting of ways — another three — and reclaimed the lead, 31-30.

The Buccaneers all but lived behind the arc in the first half. The team shot 9-20 from downtown. Only six of their field goal attempts were not three-point attempts.

Liberty Head Coach Ritchie McKay said no change in gameplan brought the Flames back. It was simply execution.

“I didn’t make any adjustments,” McKay said. “… (Reid) started to make some shots and we felt better about ourselves. (We) made more of a commitment on the defensive end and got back in the game.”

Unfortunately for McKay, his group was unable to carry any of that momentum into the second half.

The Buccaneers jumped on the Flames early, boosting their lead up to 10. Liberty’s stagnant offense coupled with the driving of CSU’s Potter proved to be too much for the Flames to overcome. The Flames lead towards the end of the first half was the last one this game saw.

McKay was somewhat pleased with the effort of his team, but also added winning is the ultimate goal, not just keeping games close.

“We just have to execute better,” McKay said. “If we don’t, we’re not going to win the game. If we’re satisfied with going on the road and being close to a team that is predicted to be one of the top teams in the league (Radford), if that’s all we want, then I’m the wrong guy for them. (My team is) going to get that message continuously, because that is not our goal.”

Haywood is the editor-in-chief.