Mama, I am coming home 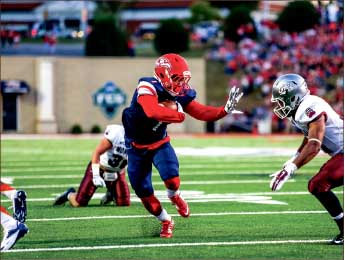 Coming into the season with high expectations following a run in the FCS playoffs in 2014, the Liberty Flames football team (3-4, 0-2 BSC) has, so far, had a rather disappointing season.

After losing to Gardner-Webb, Flames quarterback Josh Woodrum said each game “is a Big South championship for us.” Following that loss, there was little to no room for error if the Flames wanted to be back in the FCS playoffs. However, the Flames were unable to overcome the Monmouth Hawks this past weekend, losing 20-17 in overtime and giving Liberty an 0-2 record in conference play. It also marked the first time the Flames lost consecutive conference games since 2006. With two conference losses and the current play of FCS powerhouse Coastal Carolina (No. 2 in the country) in the Big South, it is unlikely that Liberty can repeat as Big South champions.

However, in spite of the loss to Monmouth, the Flames’ star defensive tackle Chima Uzowihe stated that while the loss was disappointing, the team would still be motivated to play. According to Uzowihe, “things happen,” and everything is still up for grabs in conference play.

Given the inconsistent nature of the football team this year, it is hard to predict how the team will play. Regardless, after being on the road for four consecutive weeks, the Flames will return home for the annual Homecoming game this year against Kennesaw State on Oct. 24 at 7 p.m. During their last home game at Williams Stadium vs. Montana, the fans came out in incredible numbers, setting the new attendance record for a Liberty football game at 22,551 people.

During last week’s press conference, Coach Gill discussed several areas the Flames would need to improve in order to finish the season strongly. One of the key areas mentioned was the need for improved special teams play by the Flames, especially from the field goal unit. Flames senior kicker John Lunsford has struggled to find success on field goals, making only 10 of 20 field goal attempts this year.

Prior to the Monmouth game, Coach Gill also stressed the need to start playing well early in the game. He also emphasized the need for more consistency from the team throughout the game, specifying that the team “has to do it for four quarters, and not just a half.” Unfortunately, the Flames struggled with consistency yet again this past week, being held scoreless until the fourth quarter.

The Flames also have to deal with several key injuries, most notably that of running back D.J. Abnar, who is out for the rest of the season after having ankle surgery. With that injury, running back Desmond Rice has already begun to take on a larger role in the offense, along with running back Todd Macon. Other notable injuries are offensive lineman Lucas Holder and cornerback T.J. Tillery, both of whom are out for the season.

The Kennesaw State Owls are in their first year of having a football team and their first year competing in the Big South conference. They are currently 5-1 and won their first conference game against Gardner-Webb this past week. They are averaging 37.8 points per game on offense, with much of their offense being generated through their run game, which has well over twice the amount of total yards than their passing game. They have currently outscored all their opponents by a score of 227-88.

Coach Gill highlighted the need to “keep on playing” and to continue to improve week by week. Coach Gill has hopes that the team will “have a winning record” by finishing out the season on a high note.

Saturday could also be a historic homecoming. Woodrum needs 165 passing yards to pass Robby Justino (9,548 yards) for first place on Liberty’s all-time passing yardage list. Wide receiver Darrin Peterson also set a couple records of his own on Saturday. With 13 catches for 120 yards against Monmouth, the senior passed Chris Summers (188 receptions and 2,712 yards) for first place on both Liberty’s career receptions (193) and receiving yards (2,772) list, according to libertyflames.com.

Stevens is a sports reporter.