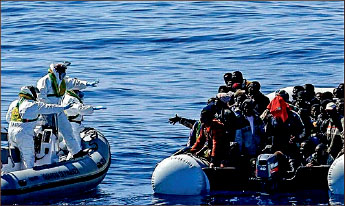 Should U.S. feel obligated to welcome those fleeing for safety in Europe?

Imagine packing up an entire life and running away to a new and unfamiliar land because home is no longer a safe place. Hundreds of thousands of migrants have dared to do just that this year.

According to the Office of the United Nations High Commissioner for Refugees (UNHCR), more than 487,000 migrants and refugees have landed on European shores so far this year. This is more than double the total for 2014, according to TIME. But these numbers only reflect those who found safe passage.

As seen in the photo of toddler Aylan Kurdi, who washed up on the shores of Turkey after perishing at sea, not everyone makes their destination safely. UNHCR reports that in this year alone there are almost 3,000 people who are declared dead or missing.

Most of the migrants originate from Africa and the Middle East, but due to the Syrian Civil War, extremist groups, and dangerous conditions that accompany living in these areas, they are now fleeing north, according to the Council on Foreign Relations.

German Chancellor Angela Merkel said that Russia and the U.S. are key to resolving the migrant crisis in Europe, according to USA Today. While Europe is accepting hundreds of thousands of migrants, CNN reports that the U.S. has only accepted 1,500 so far. This is mainly due to the heavy vetting process migrants must go through to enter into the country.

It is in this time of need that heads are turning toward the U.S. to aid in the solution.

While the need for vetting and security procedures is warranted, we have a duty to the world to assist in this crisis. Following World War I, the U.S. withdrew from the world and its issues, refusing to intervene in any affairs. Isolationism is no longer an acceptable policy, as the U.S. is now the leading power in the world.

Many of these migrants look to enter into the Schengen Zone, an area formed between 26 European countries to remove border controls so people can travel freely through these nations, but enter Europe through Italy, Greece and Turkey, putting particular strain on those countries.

In Germany alone, there have been more than 200 attacks against migrants this year, according to the New York Times. The Washington Post reports the country has also started implementing temporary border controls. Hungary’s government began building a barbed-wire fence along their border to prevent migrants from crossing into the country, according to Reuters. The New York Times reports politicians in Northern Italy have also vowed to stop accepting migrants saved at sea.

How can we, as Christians, not do something? While I am not enthused by the prospect of hundreds of thousands of migrants flooding our shores, weighing on an already weak economy and fragile government, if I was in their shoes, someone with open arms would be an answer to my prayers.

1 John 3:17 states, “But if anyone has the world’s goods and sees his brother in need, yet closes his heart against him, how does God’s love abide in him?” (ESV).

“We Hungarians are full of fear, people in Europe are full of fear, because we see that the European leaders, among them the prime ministers, are not able to control the situation,” Hungarian Prime Minister Viktor Orban said according to The Washington Post.

The European Union leaders cannot come to an agreement on how to handle the situation and called an emergency summit to discuss the problem earlier this month, but they failed to make headway in developing a comprehensive plan to address the ongoing crisis, according to The Guardian. EU Council President Donald Tusk described the urgency of the situation in his remarks at the summit.

“It is clear that the greatest tide of refugees and migrants is yet to come,” Tusk said.

All of Europe is stepping up to make sure these migrants are taken care of, and as tension grows overseas and these people are being persecuted in their new homes, it seems like the perfect time for the U.S. to stand up and open our shores. We cannot hide from the world and must embrace our duty to it.

STEFANICK is an opinion writer.