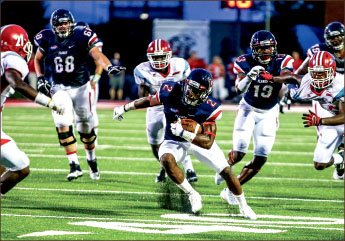 Flames travel to Morgantown to battle the Mountaineers in FBS matchup

The Liberty Flames football team will have its first major test of the 2015 season when it faces the West Virginia Mountaineers on the road this Saturday Sept. 12.

Both teams come into the contest 1-0, with Liberty picking up a 32-13 win at home against the Delaware State Hornets to start the season and West Virginia pounding the Georgia Southern Eagles, 44-0, at home to begin their 2015 campaign.

Last Saturday’s victory over Delaware State showed many positive aspects of Turner Gill’s squad, but also revealed some weaknesses that must be addressed if the Flames hope to pull off the upset on the road.

The Flames offense looked sharp at times, especially in the running game, where Desmond Rice and D.J. Abnar helped the Flames rack up 229 yards on the ground, but there were moments where the Flames stalled out on drives. The Flames will always try to establish the run early on, and sometimes it takes a few drives to get the running game going.

But if it does get going, this offense is difficult to stop.

Success on the ground opens up the playbook for play action passes and taking shots down the field. However, the Flames will most likely play it safe against a West Virginia defense that had four interceptions against Georgia Southern, though Josh Woodrum is a big step up from Eagles Quarterback Favian Upshaw.

The biggest question mark for this game will be the Flames defense, namely the secondary. Chima Uzowihe and the defensive front were impressive on Saturday, and West Virginia’s Skylar Howard tends to overthrow his receivers. If the Flames can keep him uncomfortable, it could really alleviate the pressure from this young secondary.

As far as game experience is concerned, Wesley Scott is the most seasoned player in this secondary. This inexperienced group gave up a couple big plays that did not matter as much against Delaware State, but could come back to haunt them against a team of West Virginia’s caliber. Redshirt freshman Chris Turner was burned by Aris Scott on a 47-yard pass play in the second quarter and safety Alpha Jalloh (in his first season as a starter) was called for holding against Malik Golson early in the first quarter because Golson had him beat.

Bottom line: if the Flames want to keep up with West Virginia, they will have to prevent the big plays. The Mountaineers have their share of playmakers on the outside with Shelton Gibson and Jovon Durante, so the Flames secondary will have its work cut out for it.

Most importantly, this matchup could be a major factor in Liberty’s quest for FBS recognition. If this team hopes to be considered FBS-ready, it will have to prove it can compete with FBS teams such as West Virginia. If the Flames play up to par and do not beat themselves with foolish mistakes, do not rule out the possibility of an upset in Morgantown.