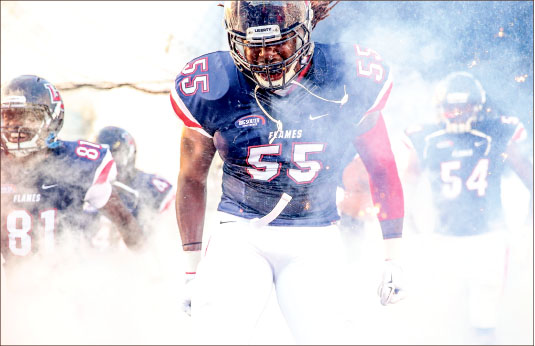 Redshirt senior running back Desmond Rice ran for 139 yards and two touchdowns in his return to the lineup and the No. 15 Liberty Flames football team beat the Delaware State Hornets, 32-13, in the season opener at Williams Stadium Sept. 5.

Rice missed the entire 2014 season with a knee injury but returned in great form Saturday to help the Flames win their first season opener since 2010. Rice and the Flames rushing attack, which included senior running back D.J. Abnar, gained 229 yards on the ground in front of a lively crowd of 18,803 fans, according to Liberty Flames athletics.
“It’s an unreal feeling right now,” Rice said. “I expected to do well, but (tonight) exceeded my expectations.”

Flames senior quarterback Josh Woodrum completed 19 of 32 pass attempts for 188 yards, two touchdowns and one interception. Both touchdown passes were to All-American senior receiver Darrin Peterson, who finished with eight receptions for 83 yards in addition to the two touchdowns.

“Overall, it was a good football game for us,” Flames Head Coach Turner Gill said. “We got a lot of reps on the offensive side, and the defense played really well. Our defensive line was outstanding. We got a lot of work to do, but we got a win and it’s good to play in front of our great home crowd.”

For the Hornets, quarterback Esayah Obado was 16-for-27 for 227 yards and threw two interceptions. Running back Jamaal Jackson managed just 37 yards on 15 carries for a Hornets ground game that accrued only 42 total yards on the night.

The Flames got the ball first and tried to establish the running game early, but their first five carries of the game netted only negative yards. They had little success on their first two drives against a Hornets defense bent on preventing Rice and Abnar from bouncing outside.

“They were doing things a little differently schematically than what we were expecting,” Rice said. “We were trying to run outside and they were playing some wide techniques, so it kind of caught us in a couple of bad plays, but once we shook that off, we got rolling.”

After a 14-yard burst by Abnar gave the Flames a needed boost in the run game, Woodrum found Peterson on a post route for a 26-yard touchdown pass to give Liberty a 7-0 lead with 7:17 remaining in the first quarter. Woodrum targeted Peterson early and often, hitting him five times for 60 yards and a touchdown on the first two drives.

“Petey is one of the best receivers in the nation, so getting him the ball as many times as possible is sort of our game plan every week,” Woodrum said. 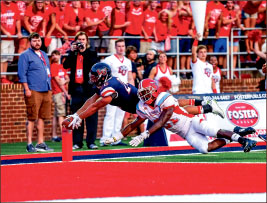 Four plays later, Rice took a third-down handoff and rumbled 23 yards into the end zone to give the Flames a 14-0 lead with 4:53 left in the first quarter.

The Flames attempted to add to their lead with 11:32 remaining in the half, but kicker John Lunsford’s 42-yard attempt was blocked by Hornets defensive end Gabriel Sherrod to keep it a 14-0 game.

Following the blocked kick, the Hornets finally got on the board after their offense went 75 yards on eight plays, which included a 47-yard completion from Obado to Scott to set up first-and-goal at the eight-yard line. Obado punched it in on a quarterback sneak, but fumbled the two-point attempt to make it a 14-6 Liberty lead with 8:05 left in the half.

The Flames added to their lead on a 52-yard field goal by Lunsford to extend the lead to 17-6 with 2:56 remaining.

On the next drive, Obado was sacked in his own end zone by Flames junior linebacker Nick Newman. Obado fumbled the ball, which his team recovered in the end zone to notch a safety for Liberty, giving the Flames a 19-6 lead.

Following the safety, the Flames got the ball back with 1:50 to go in the half and great field position. However, on first-and-goal from the nine-yard line, Woodrum threw a quick pass that deflected off the hands of freshman receiver B.J. Farrow and was intercepted by Hornets safety Kevin Jocelyn. The Hornets ran the clock out following the turnover and the Flames took a 19-6 lead into halftime.

The Flames defense, led by senior defensive end Chima Uzowihe, who finished with 2.5 sacks in the game, harassed Obado all night, sacking him five times. The Flames were stout in the run game as well, holding the Hornets to negative seven rushing yards in the first half. According to Wesley Scott, it did not take the Flames defense long to adjust to the Hornets offense.

“By the second or third series, we pretty much had them figured out,” Wesley Scott said. “Usually by then, you can tell what a team wants to do and what their motive for the game is.”

After the Hornets went three-and-out to start the second half, the Flames scored on their first drive, which ended with Woodrum finding Peterson on a quick slant from six yards out for the score. The Flames failed to convert the two-point attempt, making it 25-6 with 8:15 left in the third quarter.

The Hornets answered on the following drive, when Jamaal Jackson scored on a two-yard touchdown carry to cut the deficit to 25-13 with 5:32 left in the quarter.

Liberty would score one more time on the first play of the fourth quarter, as Rice capped off a 12-play, 65-yard drive with his second score of the night make it 32-13.

Flames junior tight end Kendall Couamin was taken to the locker room after sustaining a lower body injury on a low hit following a 30-yard reception at the end of the first quarter. Couamin did not return to the game. Peterson was taken from the sideline into the locker room early in the fourth quarter with an undisclosed injury. He returned to the field later in the quarter but did not play the rest of the game.

The Flames will head to Morgantown, West Virginia to take on the Mountaineers this Saturday, Sept. 12 at 3 p.m. They will be back in action at Williams Stadium on Sept. 19 to battle the Montana Grizzlies at 7 p.m.

F.Y.I.
The Flames wore a special decal on their helmets honoring Alison Parker and Adam Ward, the two WDBJ 7 reporters who were killed during a live television broadcast at Smith Mountain Lake on Aug. 26. The decal featured both reporters’ initials and the No. 7 in the middle of a teal and maroon ribbon. Teal was Parker’s favorite color, while the maroon represents Virginia Tech, Ward’s alma mater.