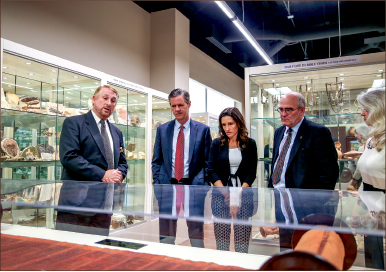 Exhibit — Jerry and Becki Falwell and others enjoy a tour of the Liberty Biblical Museum. Photo credit: Leah Seavers

The Center for Judaic Studies held a ceremony for its new Liberty Biblical Museum Monday, April 13 at 2 p.m.

Located next to the Curriculum Library in the Jerry Falwell Library, faculty members from the Center for Judaic Studies gathered in the new Liberty Biblical Museum to see President Jerry Falwell cut the red ribbon and officially open the exhibits for students. Falwell’s wife and Senior Vice President for Spiritual Development
David Nasser also attended.

The museum features archeological artifacts from excavations headed by Dr. J. Randall Price, who is the executive director of the Center for Judaic Studies, curator of the museum and a Liberty research professor.

After Falwell cut the ribbon, Price gave ceremony attendees a tour of the exhibits.

“(T)he Liberty Biblical Museum is a unique educational collection of authentic, biblical-era artifacts that provide the historical and cultural background of the Jewish people over a 4,000 year period,” the Center for Judaic Studies website states. “The exhibits give faculty, students and the public access to a firsthand encounter with the ancient past and a realistic touchpoint with the facts of the biblical faith.”

Exhibits include copies of the Dead Sea Scrolls, a 200-year-old handwritten Torah Scroll, coins from the Roman Empire and an authentic Last Supper exhibit. Also included in the exhibit is rare stone from the walls of the 2nd Temple.

During the tour, Price’s wife explained that artifacts that looked like palm-sized jars with very long necks were tear jars from Old Testament times. She mentioned that when a loved one left for war or for any other reason, the jars were used to catch the person’s tears, thus explaining what David meant in Psalm 56:8 when he said, “You keep track of all my sorrows. You have collected all my tears in your bottle.”

“My favorite exhibit was the tear jars that (Price’s wife) showed us,” junior Ellie Fraser said. “… I didn’t even know those existed, so that was cool. Also, the piece of the Temple that Jesus would have seen while he was alive. … There are just a lot of really cool things in (the exhibit).”

Falwell was also amazed at the artifacts that were displayed, stating that they were the kinds of items normally found in museums in Washington, D.C., and New York.
“It’s a lot more than I expected,” Falwell said. “It’s incredible. … It is hard to believe this is at Liberty.”

According to Price, the space was originally going to be the new Jerry Falwell Museum. However, the Center for Judaic Studies received news early in 2014 that it would be occupying the spot in May, according to Administrative Assistant Ayelet Evans.

“I had heard of (the Center for Judaic Studies) before, but the last time I remember seeing it, it was in DeMoss (Hall),” Fraser said. “So I had no idea the location had changed.”

Price said students have been trained to give tours of the exhibits for anyone interested. Exhibits can be viewed Monday through Thursday from 9 a.m. to 4:30 p.m. Friday tours are by appointment only, according to the Center for Judaic Studies pamphlet. However, Price said he hoped to eventually be able to install a sound system with earphones so students can walk up to each exhibit and listen to a more detailed description of the artifacts.

For more information on the Liberty Biblical Museum and the Center for Judaic Studies, visit liberty.edu/judaicstudies.

Brown is a copy editor.