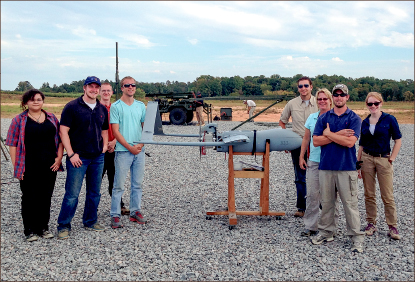 “I am the only person in charge of this program,” Marselus said. “I quite often feel like the guy in the Wizard of Oz behind the curtain throwing the levers to make the great Oz put out green smoke and fire trying to keep up with everything.”

However, Marselus also called himself something that contrasts the image of the great and powerful lord of the Emerald City.

“Despite this lump of clay that is talking right now, God has blessed us immensely,” Marselus said. “All the glory and honor goes to him.”

According to Marselus, the program officially taxied to the runway a year and a half ago after it was found that UAV technology was here to stay. At its beginning, Marselus was able to speak with industry leaders and explain to them the hopes and goals for graduates of the program asking them what they were looking for in potential hires. After hearing the vision, industry leaders told Marselus they would be thrilled to help.

“We’ve had Cloud Cap Technology giving us 90 percent off their software products, and in addition providing our program with information technology expertise at no cost, and their documents, all of them, at no cost,” Marselus said.

Marselus went on to explain how Textron provided software, command and control expertise and invaluable teaching services to him at no cost. Textron also sent instructors to help develop and teach a UAS course giving students the very latest in industry curriculum at no cost.

According to Marselus, another industry partner that is helping extensively is UAV Pro. UAV Pro offered their program and its many documents on UAV training and technology. UAV Pro has also let the UAS program house its simulators, ground control stations, and aircraft at the SOA facility.

“Our students pay $25 an hour for their simulators that at other schools cost $200 an hour,” Marselus said. “I passed that on to UAV Pro, and they said ‘We’ll just keep it at $25 an hour for you right now.’ Those are just three of our industry partners that have given us literally pennies on the dollar, and as a result our UAS program is very inexpensive.”

According to Marselus, come this football season, Liberty University will have its own blimp in the form of a Cessna 172 with a TASE 300 pod on it.

Cloud Cap Technology donated two TASE 300 pods that normally cost $90,000. UAV Pro is helping develop the ground control station that will allow an operator on the ground to utilize the pod while fitted on a Cessna 172 in the air.

According to Marselus, the pilot of the Cessna 172 does not have to even touch the targeting pod. The vision is for the operator on the ground to forward the live feed from the TASE 300 pod to Liberty Flames Sports Network (LFSN), which can go on TV screens and on the Williams Stadium Jumbotron, much like a blimp.

Marselus also spoke of a partnership opportunity shared with Virginia Tech, University of Maryland and Rutgers University during a Federal Aviation Administration (FAA) selection phase to choose six UAS test sites. During the selection phase, Marselus was able to help the state universities because of Liberty’s aviation expertise, according to Marselus.

“I want to say this very carefully, but God allowed me to be a part of this initiative,” Marselus said. “At the end of that year, we got picked as one of the six test sites in the United States of America. Because of this, we are tied in with the very latest as far as UAS integration into the national airspace system is involved.”

According to an FAA news release, the selection process spanned 10 months that included 25 proposals from 24 states. Factors involved included geography, landscape, safety and airspace use.

Marselus had the opportunity to talk with Ken Isaacs, vice president of programs and government relations for Samaritan’s Purse. Through key connections associated with the UAS program, Marselus was able to connect the Samaritan’s Purse executive with Jim Hill, president of Aircover, a company that excels in UAS technology.

Jim Hill offered Samaritan’s Purse a UAV and an operator at no cost to Samaritan’s Purse Disaster Assistance Relief Team (DART) operations. Now, when a DART team touches down in a disaster relief area, they will be able to launch a UAV to map out the area and conduct surveillance of the affected region to obtain almost immediate situational awareness.

Norman Khan, a student pursuing a degree in the UAS program, appreciated the opportunities he is able to take advantage of while undergoing his studies.
“We are the only private university in the nation that provides the certification for the small-unmanned aerial systems (SUAS),” Khan said. “This kind of opportunity gives the students a chance to be on the front lines of this growing industry. We have some great faculty members like Mr. John E. Marselus, who is always looking for opportunities for his students to progress in the industry.”

Marselus highlighted the fact that students graduating from the degree program have been able to secure jobs with industry leaders with a six figure starting salary.

“Last week, one of our LUSOA graduates were hired by General Atomics to fly the MQ-9 Predator,” Marselus said. “This is yet another company that is seeing the excellence of our graduates. God has continued to open doors where only he could open.”

Khan underscored an opportunity he and fellow classmates had with a state-of-the-art aircraft.

“In the fall semester of 2014, we were able to visit the training center for the Aerosonde (UAS) which was a great experience for us as a student body,” Khan said. “In the summer of 2015, for the first time, the School of Aeronautics will be training students, providing hands on experience flying the Aerosonde, which is a $500,000 aircraft.”

Safety is another top concern for the UAS program.

“We have to keep (the UAV) in sight at all times,” Marselus said. “We also have an observer that is looking out for traffic for other aircraft in addition to the person that’s flying it. So you have to have a minimum of two people, one person flying it and another clearing.”

Concerning the actual operation of the UAV, Liberty’s partnership with the test sites shared with Virginia Tech, University of Maryland and Rutgers University will allow them to operate UAVs. Being in this partnership gives Liberty the opportunity to be at the forefront of UAV technologies and operations.

Marselus also touched on the impact of UAV operations on privacy.

“I personally believe we have the laws in place that will be able to protect our citizens’ privacy,” Marselus said. “What we have to do is figure out how to apply those laws to UAS. The sheriffs got together two years ago and signed a document that basically said, ‘Here’s how we’re going to responsibly use UAS technology. We’re not going to wait for the federal government to tell us how to do it.’”

Marselus remains optimistic concerning the future of UAS technology. As a former fighter pilot, he understands the limits manned aircraft have and the
ability that UAVs bring to the table.

“I don’t believe UAVs are necessarily the future, but they certainly are a major part of the future of aviation, and regardless of people’s opinions, they’re here to stay,” Marselus said.

VAN DYK is the news editor.