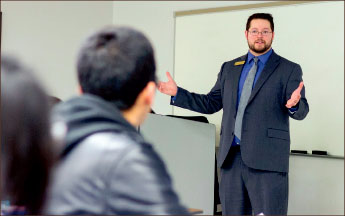 The Liberty University School of Law held an information session Tuesday, Jan. 28 on the bottom floor of DeMoss Hall.

The intention of the event was to inform those interested in law school to become better prepared when researching and applying to the law school of their choosing. Daniel J. Castellucci, an admissions counselor for the Liberty University School of Law, instructed the students to research and understand the institution before applying.

“I want to make you a smart consumer of law schools today,” Castellucci said. “I want to give you information so that you understand the process. I want you to understand what law schools mean when they say things, what they maybe are not saying, that you should ask. Because you won’t get that information unless you do ask.”

Castellucci conducted the event and explained why a law degree from Liberty is one that will allow them to seek justice for those who cannot seek it out alone.

Although Castellucci did promote the law school at Liberty, endorsing it was not his only objective.

“Today, I want to be very plain about what I am attempting to achieve,” Castellucci said. “My goal is not to brainwash you into going to Liberty law. Obviously, as a representative of the school, I want to tell you why we are the preeminent legal educator in the country.”

According to Castellucci, everyone applying to law school must take the Law School Admission Test (LSAT), a standardized exam that does not evaluate a student on knowledge, but evaluates the student on how they use and analyze knowledge.

Castellucci then turned the session around and gave an argument for why the Liberty University School of Law was the best choice for prospective students.

“The worldview of your law professors will directly correlate to the legal professional you become,” Castellucci said. “It’s hard to have law founded on anything but biblical truth.”

Castellucci addressed the view that many of the founding fathers were not Christians, but said that nonetheless, this nation was founded on principles found within the Bible.

Andrew Murphree, a history major at Liberty, said he attended the event because of the opportunities he would be given with a law degree.

“I’ve been interested in the law school for a couple years now,” Murphree said. “I think it would be really interesting to see all the career opportunities with a (law) degree, like opportunities in business and family law and possibly even something like public policy or political affairs.”

For those who are interested in a law school with a biblical worldview but could not attend the meeting, Castellucci urged students to seek out information.

Students can obtain information about the Liberty University School of Law by going to law.liberty.edu, emailing the law school at lawadmissions@liberty.edu or calling (434) 592-5300.

ShareTweet
tagged with school of law