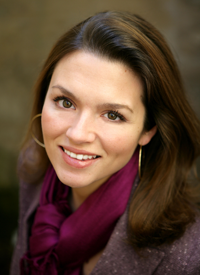 As a reporter for WSLS News in Roanoke, Va., Johanna covered a variety of local stories. Photo provided

Johanna Calfee (2002) is an owner and managing editor of five publications at Prototype Media. On top of that, she is the director of communications at Prototype Advertising.

On top of that, she is the principal at a building renovation firm called D & J Calfee LLC.

On top of that, she is the owner and photographer at Baby Birds Photography.

On top of that, she is an owner and partner at SDA Health Products, which manufactures Arctic Spray.

And on the weekends, she teaches a class that leads people to baptism at Brentwood Church with her husband of eight years, Daryl. The couple also leads a small group from Brentwood on Tuesday nights in their home. Despite her lengthy list of roles, she says her greatest achievement is her marriage, which has also given them Ella Charlotte, their daughter born in August 2010.

“We have just been so blessed with second chances, a ton of grace and people that have come along beside us to let us know that our jobs are not the important things,” Johanna said. “There was a point where they were, and we were suffering greatly for that.”

The stress led to Johanna’s decision to leave her role in TV in 2008.

“All of a sudden, I woke up four years into our marriage and four years into this job and realized I was a terrible person,” she said. “It was the hardest and best decision I ever made to walk away from TV, and I wouldn’t change it.”

That decision changed her life drastically and, Johanna would tell you, for the better.

“It is nothing like I imagined, but it is so much better,” Johanna said. “His script for our life has been way better than I could have written.”

She is amazed at how much her life has changed since she graduated from Liberty University in 2002.

“If you put a split screen of my life [then] next to my life right now, it’s radically different,” Johanna said. At only 30 years old, Johanna has successfully conquered the realms of broadcast and print journalism as a reporter, anchor, writer and editor. Though the medium Johanna uses has morphed throughout the years, she still sticks to the dream she developed as a child—the desire to tell people’s stories.

Johanna’s flair for acting was also a way for her to tell stories through theater. She traveled with a Christian performance group called “Blessed Assurance” in middle and high school.

“The idea of story-telling and doing so on-stage was very appealing to me,” Johanna said.

In addition to her love of writing and theater, Johanna also had a passion for reading—so much so that her parents joked that she wore a trail in the carpet of their home.

“I knew the path in our house to the point where I wouldn’t have to look up from the book I was reading,” Johanna said. “I would just walk through the house with my nose in a book, and get something out of the fridge without looking up.”

To this day, she is still known for that habit, which her husband Daryl affectionately calls the “Rabbit Trail of Johanna.”

“He can tell where I am in the house,” Johanna said. “He’ll go through the house, and there will be a book down and then a pair of glasses and then another book.”

When Johanna graduated from high school, she considered University of Virginia and James Madison University, her parents had a different plan for her college career. They wanted her to attend a Christian school. When they visited Liberty University during College for a Weekend, the name Jerry Falwell meant nothing to the family.

“We had never heard of Jerry Falwell,” Johanna said. “My dad was a preacher but not Baptist.”

Despite the unfamiliarity, Johanna realized that Liberty was the place for her.
“It really gave me a chance to kind of break away and mold my own faith on a more adult level,” Johanna said. “I have friends to this day who are so dear to me that I met at Liberty.”

Majoring in broadcast journalism, Johanna’s interests shifted a bit from print to broadcast. The print medium was old news to Johanna, who had been writing for “The Richmond Times-Dispatch” in high school and “The Champion” in college.

“Print was very familiar to me, so maybe it was just the challenge of transitioning that into some other role,” Johanna said.

During her senior year, she interned at WSET in Lynchburg and “got bit by the TV bug.” After graduating, she landed a job at WSET ABC 13 as news producer and fill-in reporter.

Over the next six years, Johanna worked as anchor, producer, fill-in reporter and eventually a weather forecaster at WSLS, while working towards her degree in meteorology at Mississippi State University. While there, she and her news team won a national Emmy and Peabody Award for their coverage of the Virginia Tech shootings in 2007.

“[It was] hands down the worst day ever as a journalist,” Johanna said. “It was so personal. The majority of our news room were Virginia Tech graduates, so that was just like someone had attacked their family.”

Although Johanna says the team coverage that day was inspired and genuine, she is hesitant about accepting recognition for it.

“Winning an award for that was bittersweet at best,” Johanna said. “It’s like you almost don’t want it.”

During her career in television news, Johanna was also able to cover some lighter topics and interview several influential people. She said her favorite person to interview was a toss-up between Senator John McCain and former Virginia governor, Tim Kaine. McCain, she described, was a skilled communicator and genuine person.

She also interviewed Patrick Dempsey of “Grey’s Anatomy” fame while he was stockcar racing at the Virginia International Raceway in South Boston, Va. She was both impressed by his personable nature and shocked by his small stature.

Television journalism began to wear down on Johanna, especially during her first year as a reporter.

“I was a one-man band,” Johanna said. “I carried my own equipment, was the editor, shooter, writer, reporter, and so it was just me on the road into wherever it was that day. That was really hard.”

The stress of finding a story and making the daily deadline put a lot of pressure on Johanna, who prided herself as being reliable.

He role in television also eventually took a toll on Johanna’s attitude and relationship with God and others.

“My head was in the wrong place, my heart was just ugly at that time,” Johanna said. “It’s funny how fast you can get away from who you think you are and what your principles and morals are if you don’t have that real walk with God every day.”

She began to realize that she did not like the person she had become and had to decide whether her job or her marriage was more important.

“I don’t blame TV. My mistakes are my own, and I own them 100 percent,” Johanna said. “But certainly the environment brought out things in me that already existed and made them worse—pride, vanity and this inflated sense of importance.”

These days, Johanna is juggling the responsibilities of being editor and mother.

“It’s trying to balance and manage a whole team of writers, photographers, layout, editorial ideas and stories with a one-year-old and her needs,” Johanna said. “The biggest thing is trying to overcome the guilt of whatever you’re doing, feeling like you should be doing the other thing and trying to strike that balance.”

In the past three years, Johanna says she has refocused her life and believes that her next 30 years will be lived striving to glorify God.

“It’s probably the first time where I’m really aware and intentional about going down His path instead of mine,” Johanna said.

She says she feels like the first quarter of her life was self-glorifying. Though unsure of where God will lead her, she is happy to be following Him.

“So I hope—I pray—that that will just lead to Him being glorified through other people, through relationships, through business partnerships, whatever,” Johanna said. “That is my greatest hope for the future, as non-specific as that is. We would like to have other children, but we’ll see. A day at a time.”

Johanna’s refreshed mission to serve God has helped her gain a different perspective on her earthly career.

“I don’t think what I do is very important, in the sense that at the end of the day, the majority of it is dust. Unless I get to tell a story that touches someone and furthers the kingdom—that’s such a cliché thing to say but it’s true—it doesn’t really matter,” Johanna said. “That was a realization that took me a really long time to grasp and was very hard for me to come to, because when you’re in the middle of it, it’s the most important thing in the world.”