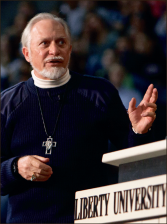 Not a tame lion — Douglas Gresham spoke at convocation last Monday on working with Narnia and growing up with C.S. Lewis. University Advancement photo

Gresham is the artistic director of the Narnia series and recently wrote a personal biography of Lewis entitled Jack’s Life.

In a rich British accent, Gresham told of his testing American childhood, growing up with Lewis and his own producing, counseling, ministering and writing careers.

Gresham lived with Lewis for 10 years, from the time Lewis married Gresham’s mother until Lewis’ death in 1963.

His first impression of the man he already knew as the author of some of his favorite books was a scholarly-looking man “dressed in probably the shabbiest clothes I’ve ever seen with nicotine stained fingers and teeth.”

“I lost an illusion and gained a very great stepfather,” Gresham said of their meeting.

Gresham gave students a glimpse into the life of Lewis by telling about his life, growing up as Lewis’ adopted son.

“I just thought it was really neat to hear his stepson give a personal glimpse into a man’s life that we only know from the biographies we read,” Liberty student Lauren Umstead said.

Gresham attributes the success of Lewis’ writings over the span of several decades to supernatural forces.

“While Jack wrote all these stories down, I firmly believe the Holy Spirit was behind them.”

Gresham has dedicated his time to making Lewis’ works known to a new generation of readers and viewers. He has helped produce film versions of Lewis’ books, The Lion, The Witch and The Wardrobe, Prince Caspian and The Voyage of the Dawn Treader.

Gresham challenged students to be mindful of their conduct as Christ followers, and to be certain they were continually pursuing his will.

Gresham told students before he began his producing career, he had asked God never to make him a minister or a counselor. A few years later God made him both of those things when he and his wife managed a home for women struggling with psychological issues.

“When the Holy Spirit gives you a job to do it can be very difficult, but it can also be very rewarding,” Gresham said.