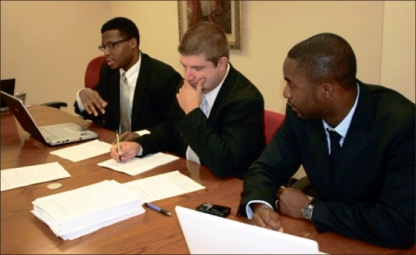 Team to present to Nintendo executives

Marketing students will be heading to New Orleans, La., March 23 to face some of the top universities in the annual Collegiate Case Competition.

“The thing about the case competition is it’s top of the line,” Dr. Kendrick Brunson said. Brunson has led the teams through their five years of competition. Elite — Liberty’s AMA Case Competition Team is one of only 10 in the country to present before Nintendo of America executives.

The American Marketing Association hosts the Collegiate Case Competition. Every year the competition has a client who presents a problem to teams of marketing students. This year’s client is Nintendo Co.

Teams then write a 20-page paper detailing their solution and how they would reach the company’s business goal.

“The ‘problem’ each year is how to reach a market segment with a professional strategy (advertising),” Brunson said. “The ‘solution’ is a strategy for a promotional campaign.”

According to Brunson, over 60 schools submitted cases. Cases were graded on strategy, research and grammar. Only 10 finalists were chosen. The schools include Liberty University, the British Columbia Institute of Technology, the University of Arizona and five-time champion, the University of Pennsylvania.

“The challenging part about this was keeping up with every detail that the paper asks of us. In the paper you have to be very specific and to the point,” senior Bryant Cobb said.

Brunson does not mind telling his team to step it up.

“I’ll say, ‘Okay guys you’ve got a decent paper here, but it’s not going to the finals’,” Brunson said.

The team submitted their case in December.

Teams will travel to New Orleans to give presentations based on their papers. Since the beginning of the semester, the team has been preparing its presentation. On March 22 at 7 p.m., students can watch the team give its presentation in a practice run. Liberty will be presenting to Nintendo executives on March 24 at 2:40 p.m. central time.

This kind of preparation takes a significant amount of time.

“We probably spent well over 100 hours both in and out of class total,” senior Gary Ashby Jr. said.

All-nighters and energy drinks were the key to the team’s preparation, Cobb joked.

Excitement and nervousness pervade the team. However, they are confident in their case and preparation.

“I am extremely nervous at the present time, but I am confident that I will not have the same nervousness closer to competition time,” senior Brittany Heath said.

Yet for all the countless hours of work and sleepless nights, the competition is rewarding. Senior Ryan Marrero said the competition was as close to the real thing as you could get. Heath agreed, saying it had the elements of brainstorming and working with a team. Seniors Junyoung Oh, Akintayo Rockson and Brittany Searce are also on the team.

“It is helping me prepare for a career in creative endeavors such as advertising and product design,” Ashby said. “It has also helped build in me a proper focus on why I am here and how God would have me both contribute and lead.”

Brunson and Dr. Paul Young decided to make the preparation of the paper a three-hour course offered in the fall semester. Marketing students who are invited can audition for one of the eight available spots. Then the previous year’s team has the chance to interview candidates and work with Brunson to choose the appropriate candidates.