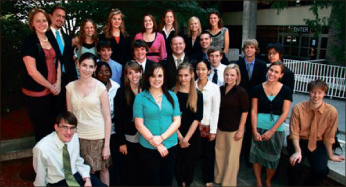 At the end of last semester, the Liberty University Debate Team held the top spot in three ranking organizations, American Debate Association, Cross-Examination Debate Association and National Debate Tournament (NDT), a news release said. The team continued its winning streak at the District VII qualifying tournament Feb. 19 to 20. The tournament determined whether or not the team would qualify for the National Debate Tournament. The team — The Liberty University Debate Team held the top spot in three ranking organizations at the end of last semester. Photo provided

At the district tournament, the debate team went up against teams from Maryland, Pennsylvania, New Jersey, Virginia and West Virginia. According to Michael Hall, director of debate, only two teams per school can qualify for the NDT, with the top seven out of 22 teams advancing to the NDT in March.

“We had a record breaking performance this weekend,” Hall said. “We took four teams to the tournament and all four placed in one of the top seven qualifying positions.”

The debate team consists of many two-person teams. To prepare for tournaments, the team holds practice debates.

“We will let two teams debate against one another,” Hall said. “We will either let them finish the debate completely or do a stop-and-go debate, in which we stop and fix things as needed.”

The team also takes feedback on speeches received from tournaments and practices so they do not repeat the same mistakes.

“We prepare for tournaments both individually and collectively as a team,” freshman junior varsity team member Brittanie Hedrick said. “Before tournaments we review areas where we need to do more research, and our coaches delegate research assignments to each individual.”

“We share everything we find with the team, which greatly expands the amount of evidence that we have access to,” Hedrick said.

This is Hedrick’s second semester on the team. Prior to joining the team at Liberty, Hedrick was on a debate team her entire high school career in the home school debate league.

“[Debate] is highly academically oriented, and there is a thrill involved with being in the heat of a debate round, arguing to make your point clear,” Hedrick said. “It is highly rewarding to hear that you have persuaded the judge, that you have presented your case efficiently and all your hard work has paid off.”

The debate team accepts new members in the Fall of each year since topics are debated for an entire year beginning in September. Students interested in the debate team stop by the Debate Team office in DeMoss Hall 2172 and ask for Bessie Grayson, the administrative assistant, or call the office at 434-582-2080.