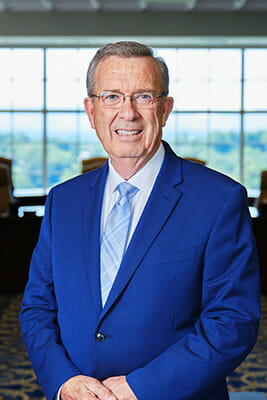 An entrepreneur and Baptist minister, Jerry Prevo has been a member of the Liberty University Board of Trustees since 1996 and filled the role of Board Chairman since 2003. He recently retired as the senior pastor of Anchorage Baptist Temple in Anchorage, Alaska, where he served for 47 years.

Raised in Tennessee, Prevo graduated from the Baptist Bible College and completed other work at various universities, including the University of Tennessee, Belmont College, and Tennessee Temple. He moved to Alaska in 1971 to take over a small mission work, where he put his entrepreneurial skills into action. Over time, he expanded the church congregation, including the implementation of a bus service to pick up children for Sunday services and, by extension, their parents. In the mid-1970s, the mission work purchased 20 acres and built a white-steeple building to hold services, and in 1992, a 43,000-square-foot auditorium was completed.

Prevo has witnessed Anchorage Baptist Temple become one of the largest churches in Alaska. The services have drawn an average of more than 2,000 people per week. The church also offers education for preschool through senior high at Anchorage Christian Schools — the largest Christian school in Alaska — and ministers through its television station. Additionally, Prevo is the CEO and chairman of Christian Broadcasting Inc., which he started and now has three stations and two broadcasting towers in Anchorage, Alaska.

In 2020, Prevo took on the role of interim president of Liberty University. In accepting this role, he stepped down as Board Chairman and officially began his new duties in August 2020. Since then, he has led the university with a renewed focus on Liberty’s foundational Christian mission. He has provided stable leadership — supported by Liberty’s ongoing enrollment growth, excellence in academics and intercollegiate athletics, and thriving spiritual life — and striven to make Liberty an employer of choice through multiple initiatives, as well as helped lead the university through its 50th Anniversary celebration in Fall 2021.