On Monday, Liberty University President Jerry Falwell deleted a post on his personal Twitter account and apologized for the pain he caused the African American community after posting an image of a mask he customized in protest of Virginia Gov. Ralph Northam’s order for all Virginians to wear a mask while in public.

The image was from the governor’s medical school yearbook and showed the governor in blackface standing next to someone dressed as a member of the Ku Klux Klan. The original tweet was posted on May 27, just days before protests occurred across the nation in response to the unjustifiable death of George Floyd in Minneapolis, Minn., at the hands of law enforcement officers.

Falwell contended the tweet was meant to make a political point, but in his recent three-part tweet, he said he listened to African American leaders at LU and African American alumni and has apologized for “any hurt my effort caused, especially within the African American community.”

“I understand that by tweeting an image to remind all of the governor’s racist past I actually refreshed the trauma that image had caused and offended some by using the image to make a political point.” 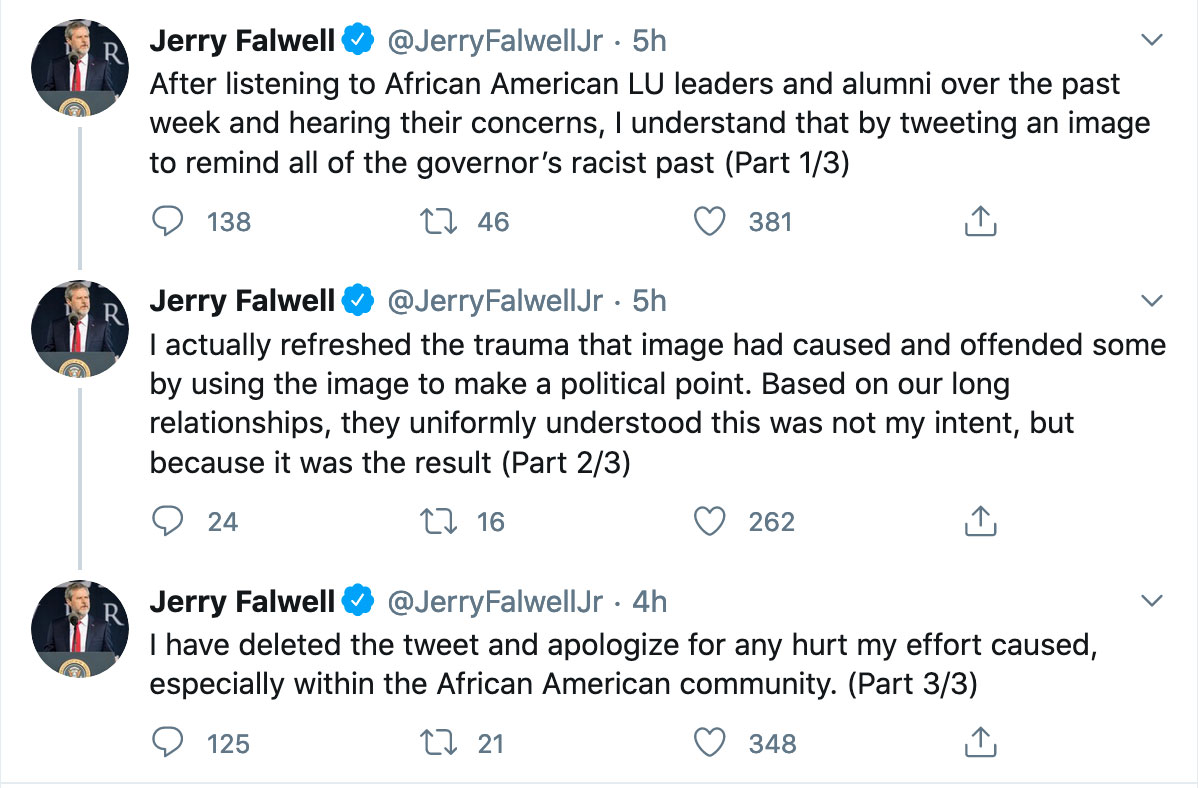 Jerry Prevo, Chairman of Liberty University’s Board of Trustees, said the members of the Board of Trustees’ Executive Committee are satisfied with the President’s explanation of his purpose and intentions.

“Our Executive Committee met with President Falwell last week and discussed the issues surrounding his recent tweets, especially the ones concerning his idea to design a mask featuring Governor Ralph Northam and another person, one in blackface and the other in a Ku Klux Klan mask and robe. We understand these images have been hurtful for a number of our friends to see. We also know him and know him not to be a racist. Nor do we believe that he has been running Liberty University in a way that discriminates against African Americans.”

Prevo said the Executive Committee understood the background on the politics in Virginia that led Falwell to post the original tweet, including Northam’s move to strip tuition assistance grants for online students, many of whom are African American, and place excessive regulations on higher education during COVID-19, “doing the most injury to those on the lower end of the economic spectrum, who are disproportionately persons of color.”

The university remains committed to fostering diversity in its academic and professional community. In January 2018, the university formed the division of Diversity, Equity, & Inclusion to lead the development and implementation of initiatives that support Liberty’s desire to have culturally and ethnically diverse students, faculty, staff, and leadership, free from all unbiblical and unlawful discrimination. In November 2018, the Board of Trustees adopted a resolution to advance efforts in diversity across campus.

Vice President for Equity and Inclusion/Chief Diversity Officer Greg Dowell worked with Liberty’s attorneys to draft the resolution, and President Falwell brought it before the board for a vote. Falwell was the catalyst for the formation of the new division and remained an integral part of the adoption process for the Resolution on Equity and Inclusion.

“This resolution is an important opportunity to model diversity in higher education from a biblical perspective, and, when done right, it fits perfectly within the boundaries of the law,” Falwell said in a news release in 2018. “Liberty has always sought to provide an educational experience that celebrates the unique ways in which we all reflect the image of God, and from that understanding, to foster an environment where students from a variety of cultures and backgrounds achieve academically and grow in their faith together.”