The event, “Your Voice. Your Future. Opioids: A National Crisis,” was moderated by former Fox News reporter Eric Bolling and is one of 14 town halls that have been planned throughout the country. Bolling lost his son, Eric Chase, to an accidental opioids overdose in 2017 and is using his media platform to help join forces to fight the epidemic.

The series kicked off at Liberty on Nov. 28 and featured the first lady as well as U.S. Secretary of Homeland Security Kirstjen Nielsen and U.S. Secretary of Health and Human Services Alex Azar II. The first lady has made preventing opioids-related deaths a main pillar of her BE BEST initiative to improve the health and well-being of today’s youth. 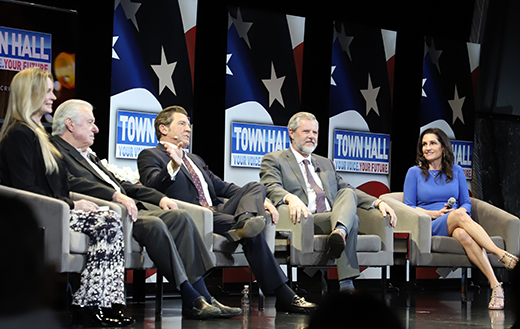 President Falwell said Siegel, the president and CEO of Westgate Resorts, spoke at Liberty’s Convocation in September 2015, just a few months after losing his daughter. His visit encouraged Falwell to start taking a closer look at how to combat the epidemic, including creating an atmosphere where students are encouraged to get help.

“We implemented a program where students with a problem can self-report without fear of reprisal, without any repercussions at all,” President Falwell said.

The university is equipped with Narcan, an overdose reversal drug that can save lives, thanks to Siegel’s urging, Falwell said. “We fortunately have not had to use it yet.”

Becki Falwell added that as a mother and grandmother, she can’t imagine the pain that people like the Bollings and Siegels have gone through. She said removing the stigma around drug problems can help save lives.

“Everybody just needs to know that it is nothing to be embarrassed about; it’s a medical condition,” she said. “The families and university staff and faculty members need to love on our children. The children need to feel love; they don’t need to worry about going and telling their parents that they have a problem — their parents love them and would rather them be here than have a problem and pass away.”

President Falwell also said churches need to do a better job of teaching people to be loving and forgiving toward those who struggle with drug addiction. 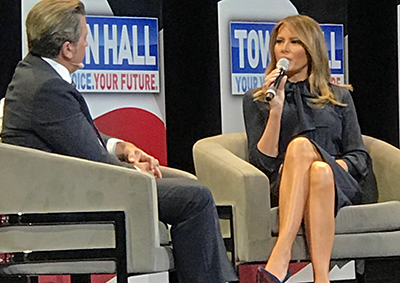 The First Lady spoke about the rising number of deaths from overdoses in the United States — over 70,000 in 2017, with 47,600 involving the use of opioids — and relayed the Trump Administration’s efforts to make sweeping changes to regulations on opioid abuse. The administration declared the crisis a nationwide Public Health Emergency in October 2017 and has taken action by designating $1.4 million in grants for addiction prevention and treatment as well as more than $50 million to support law enforcement programs that assist people battling addiction.

Melania Trump also spoke about her experience visiting hospitals where babies are born with neonatal abstinence syndrome (NAS) from their mothers’ addiction to opioids.

She said awareness can begin by discussing the dangers of drugs early with children.

“The stigma needs to be addressed,” she said. “We need to talk about it.”

The first lady also said the media can play a larger role focusing attention on the opioid crisis. 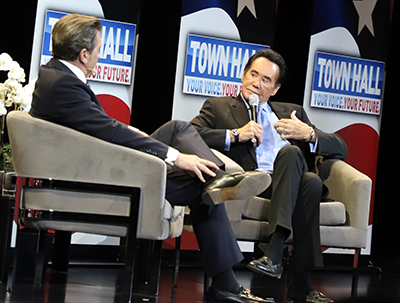 “I wish the media would talk about it more,” Trump said, “and educate more children, also adults, parents, about the opioid crisis that we have in the United States. … It should be on the front pages of the newspapers. … I challenge the press to devote as much time to the lives lost and the potential lives that could be saved by dedicating the same amount of coverage that you do to idle gossip or trivial stories.”

Liberty has partnered with Sinclair Broadcasting Group to sponsor more town halls in Baltimore, Md., on March 14 (addressing what U.S. cities and towns are doing to combat the crisis); West Palm Beach, Fla., on March 27 (discussing the gateway for drugs and entry into the U.S.); and Little Rock, Ark., on April 16 (on the prevention and solutions to the crisis).