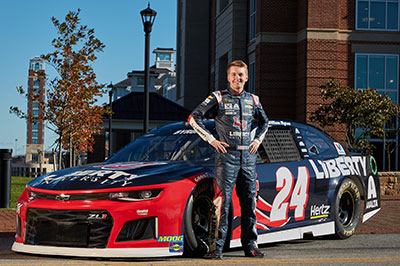 With that race, Byron, who is pursuing a degree in business communication through Liberty’s online program, earned his fourth Top-10 finish in his first season in the Cup Series, the highest level of NASCAR.

“Obviously, (winning Rookie of the Year) was our No. 1 goal, … and it’s awesome,” Byron told NASCAR.com. “It’s one step toward a bigger goal of winning races and championships. I have a very similar background to Jeff (Gordon) coming up through Hendrick Motorsports, so hopefully we can carry that tradition on and try to get the No. 24 back to Victory Lane.”

“It’s been a difficult road, but there have been a lot of things I have learned,” Byron said during an Oct. 24 visit to campus. “I’m focused on finishing stronger and honestly looking forward to next year and the things we have ahead.”

The 2018 season concludes on Sunday with the Ford EcoBoost 400 at Homestead-Miami Speedway in Florida, where Byron will be aiming for his fifth top-10 finish with hopes of moving up in the final points standings.

Liberty will remain a primary sponsor for the No. 24 car team again in 2019 when seven-time Cup Series champion crew chief Chad Knaus will be on board. The season will open Feb. 10 with the Advance Auto Parts Clash at Daytona International Speedway, followed by the Daytona 500 the following Sunday.

Read more about Byron and Liberty’s online program at Liberty.edu/24.