Convocation at Liberty University on Friday involved the plucking of guitar strings and tugging of heart strings as Third Day front man Mac Powell led over 10,000 students in worship before bringing his wife, Aimee, on stage to share their family’s story.

Kicking things off with the upbeat spiritual anthem “Soul on Fire,” the four-time Grammy Award winner had the entire Vines Center crowd on its feet clapping and singing along. Liberty’s Worship Collective provided a choir of backing vocals and the instrumental accompaniment throughout Powell’s mini-set. He also performed “Victorious” from Third Day’s latest worship album “Lead Us Back,” before leading the crowd in singing the popular praise hit “God of Wonders.”

Mac Powell, whose band has sold over 10 million albums, is no stranger to Liberty, having performed on campus several times dating back to 1997. He also led worship in Convocation in 2014.

After the praise time, Mac and Aimee Powell sat down with their good friend David Nasser, Liberty’s senior vice president for Spiritual Development, to talk about how the Lord led them to adopt two of their five children. The Powells introduced their children, who were in the audience.

“Never when I was growing up did I think I was going to be an adoptive mother,” Aimee Powell said.

She explained that the Lord stirred the passion for orphans in both her and her husband’s hearts early in their relationship when they served in a diverse after-school program, but they did not pursue adoption until later. After having three biological children, she thought her family was complete. But the example of Nasser and his wife, who adopted a son from Guatemala, reignited the couple’s desire to honor God by opening their home to one, and then two, orphans.

“We fell fast in love with Rudy (Nasser) and we just started down the road of praying again,” she said. “(Adoption) changed our world, turned it upside down, and it has been incredible ever since.”

After dispelling the myth that a parent cannot love an adopted child as much as a biological one, Mac Powell shared how an earthly adoption can be a powerful picture of God’s love for His creation. He said that in Old Testament Israel, a parent could legally “divorce” from an estranged child, but a parent could never divorce a child whom they had adopted into their family. He said that it makes reading Ephesians 1, where Paul says God adopted His children, more powerful.

“When you are adopted,” he said, “there is nothing that is going to take you away from God’s family. You are in God’s family forever.”

Mac and Aimee Powell also talked about how their racially diverse family (their adopted children are African-American) is a picture of what God’s family looks like.

Mac Powell closed by praying for orphans around the world, asking God to protect them, show them that they are loved, and raise up people to care for them, love them, and adopt them.

Before they left the stage, a group of students and a faculty member from the Department of Studio & Digital Arts (SADA) unveiled works of art they created. At the beginning of Convocation, the letters O-R-P-H-A-N-S were displayed on stands. The artists covered the letters with a beautiful work of art while the service continued. At the conclusion of Convocation, as the painters displayed their creations, Nasser explained that the Gospel does not merely erase a label, like the word “orphan,” but God replaces it — in this case with “family.” The SADA artists then turned over their paintings to reveal a family portrait they had painted of the Powells. 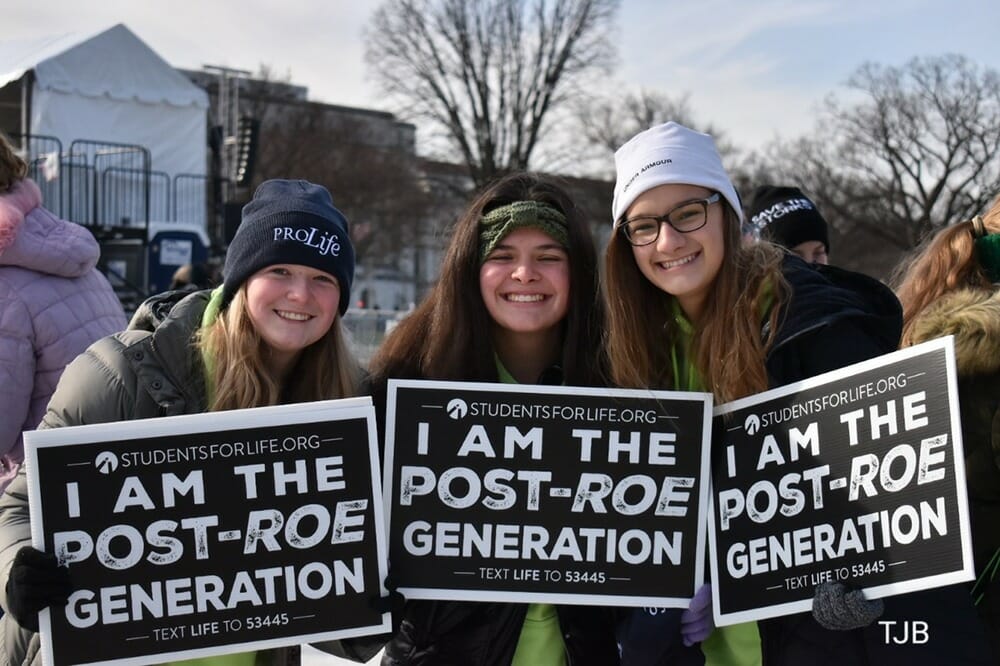 Over 600 Liberty University students show support for the unborn in Washington, D.C., at annual March for Life 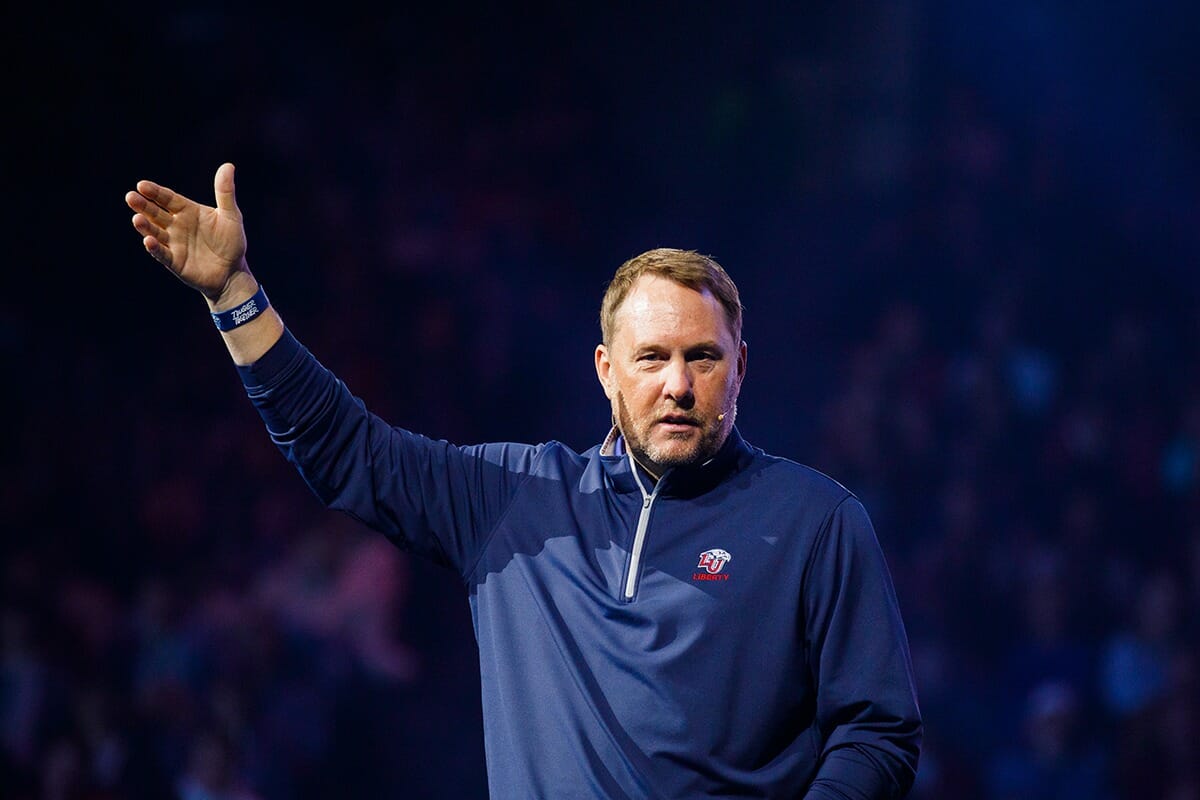 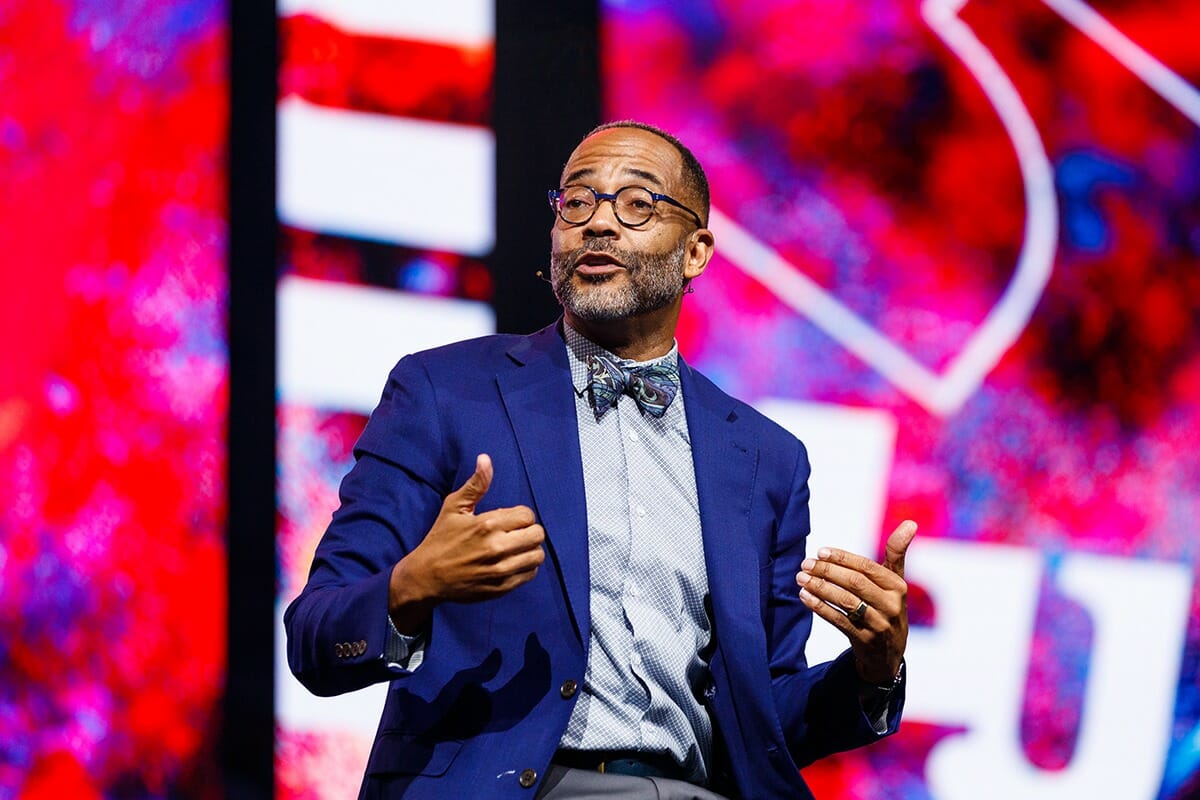