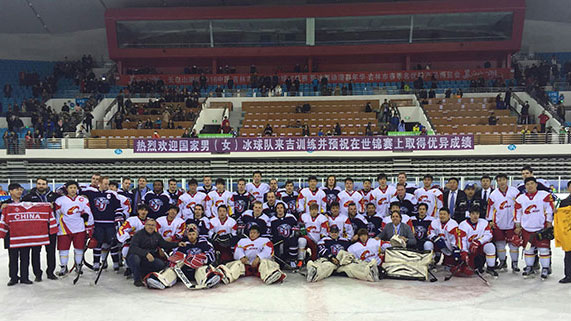 Players and coaches of Liberty University’s Division I men’s hockey team are on a 10-day tour of East Asia during spring break this week, where they are competing against international teams on their fourth cultural exchange trip in the past 10 years.

“Whether it is from the cultural perspective or the heart perspective, there is a lot of growth that can occur from experiencing something like this,” said Liberty Associate Head Coach Jeff Boettger, who has coordinated all of the hockey team’s trips along with Head Coach Kirk Handy.

“We visited fourth- through ninth-grade classes at a private school,” Boettger said. “Our players played floor hockey with the students and then spoke about university life, creating balance with academics and athletics, and what it means to develop the whole person. It proved to be both fun and educational for all.”

The Flames defeated a Russian club team and lost a highly anticipated showdown with a national team from East Asia. They face another East Asia team and a university team from South Korea before returning on Saturday.

“That city in East Asia had not had that type of an event with an international team in about 20 years, so it was an awesome experience for everyone,” Boettger said, noting that that game attracted more than 7,000 fans to the Olympic-sized ice arena (15 feet wider than that in the LaHaye Ice Center).

More important than the memories made on the ice have been the relationships formed with players and fans before and after the games, Boettger said.

Assistant Coach Marc-Andre Bourdon, who has helped organize hockey camps in several locations across Europe, said this experience has been rewarding on many levels.

“It is a good opportunity to shine a light and try and impact some people,” he said. ”We want to do our best (on the ice), but we go there for other purposes, too. These things are life-changing, to get out of the comfort of your house and see other cultures. Every time I go somewhere else, I always come back and appreciate things more. It makes me grow as a person.”

The trip is one of several spring break trips organized through LU Send, Liberty’s office for all student travel.

LU Send also sent students on its first flagship trips to London, Paris, Rome, Israel, and Tokyo during spring break. The tours allow students to earn academic credit while honing specific career skills and interacting with a new culture. The trips include a service element.

More students are currently representing Liberty around the world on several other LU Send trips. Students from the School of Divinity are studying in England and Scotland; the Department of Global Studies has students serving in Ecuador; School of Business students are using their skills to help different businesses and provide clean drinking water in Haiti; School of Nursing students are providing medical attention in Israel; and the Center for Counseling and Family Studies has students ministering to sex trafficking victims in Baltimore.