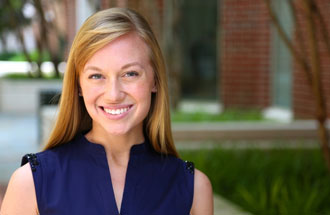 Liberty University senior Sarah Corder was named Student of the Year at the annual PRWeek Awards in New York City on Thursday, March 20. The awards ceremony is the Oscars of the public relations industry and is attended by representatives of the nation’s most successful firms.

Corder will receive a cash prize and a paid internship with PRWeek in New York City. She was one of five finalists, along with fellow Liberty senior Courtney Garrett. Corder was one of two to receive the free trip to the awards ceremony, where she learned she was the winner.

Corder is the second Liberty student to earn this top honor. Alumna Keri Cook (’12) received the award in 2012.

The awards are hosted by PRWeek, a business that supports public relations professionals across the country through online and print resources, events, and social media.

Corder said she had the opportunity to meet executives of some of the largest business brands and is excited to begin her internship this summer.

“Representing Liberty University is an absolute honor. I believe in the school and I feel like I promote it wherever I go. So being able to advance my own career while giving credit to Liberty and foremost to God is the ultimate reward,” she said.

For the competition, all entrants devised a campaign and conducted a journalist pitch to a PRWeek news editor. The assignment this year was to create a partnership between a fictitious airline company and the 2016 Summer Olympics by using its sponsorship to increase the airline’s frequent flyer program.

According to PRWeek, Corder earned the honor for her “sound research, professionalism, creativity, and social media savvy.”

“The manner in which Corder’s research informed her entire program impressed judges,” the website reads. “ … Sealed by her exemplary journalist pitch, tonight’s honor is surely just the first step in what will be a long, prosperous career.”

Corder produced a five-page campaign and a 20-page plan book, including photos and infographics. The project was a requirement for her public relations strategies class.

Corder said she was supported by several professors in School of Communication & Creative Arts and by staff at the Career Center.

“Liberty University has a great community of professors and staff who are very helpful in and out of the classrooms — they go above and beyond; they bring their experience and faith to a very humble position where they share it with others,” she said.

Amy Bonebright, assistant professor of communication studies, said those who have taught Corder are not surprised at her achievements.

“She loves a challenge and always rises to meet it,” Bonebright said. “Sarah has served her fellow students and the university through her leadership in Liberty’s chapter of the Public Relations Student Society of America (PRSSA), and she is leaving Liberty in May having taken full advantage of the many academic and hands-on opportunities she was offered.”

Corder serves as the social media director of the PRSSA. She also works in Liberty’s Career Center and is a member of Lambda Pi Eta, an honor society for communications students.