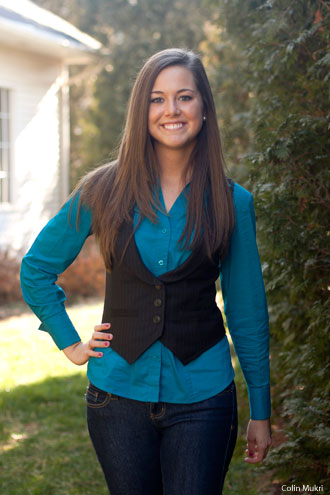 Liberty University senior Keri Cook has been named Student of the Year by PRWeek, a weekly trade magazine for the public relations industry.

Cook was one of five finalists for the award, presented at the annual PRWeek Awards in New York City on Thursday, March 1. She receives $5,000 and a paid internship at Hill & Knowlton, a leading communications services firm with national and global clients.

Cook will be featured in the April issue of PRWeek.

To enter the contest, each participant devised a public relations campaign to showcase the technological innovation of Ford Motor Company. At Liberty, the contest was a requirement for students in Dr. Angela Widgeon’s public relations strategy class.

PRWeek chose five finalists, who presented their campaigns in front of an expert panel on Jan. 24 in New York City. The competition consisted of three parts: a public relations plan, a response to a crisis communication situation and a media pitch. The judges chose two finalists and Cook learned she was the winner during an awards dinner on Thursday night.

“It’s a big honor representing Liberty University in this way,” Cook said. “The judges know our name now. People at the agencies that I talked to think well of our school.”

She said winning the award encouraged her even more to pursue a public relations career.

“I feel really encouraged in God’s direction, that this is the path I’m supposed to be on career-wise,” she said.

She said the hands-on project complemented her classroom studies.

“It’s encouraging to know that what we’re learning in the classroom actually is applicable to the industry, and we’re getting the tools now that actually impress real-world employers,” Cook said. “I think that speaks well for Liberty’s curriculum and academic standards.”

Beyond devoting much time to the competition, Cook is a marketing intern at Harris Corporation in Lynchburg, Va., and serves as the president of Liberty University’s chapter of the Public Relations Student Society of America (PRSSA). The club has its own public relations firm, Innovations, which serves different clients in the Lynchburg area, including College Republicans, Invisible Children and Special Olympics Virginia.