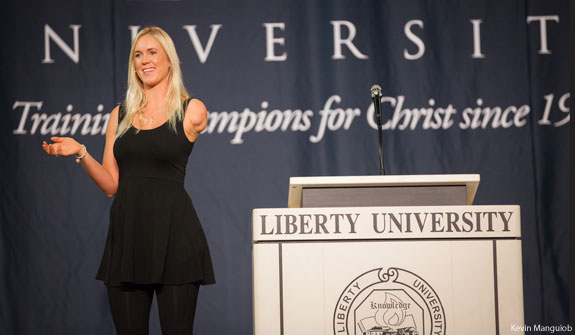 Bethany Hamilton, professional surfer, author, and shark attack survivor, shared her testimony with students and relayed to them the importance of overcoming obstacles with Christ by their side during Liberty University Convocation on Wednesday.

Hamilton, who is from Hawaii, has surfed since she was a toddler. She began surfing competitively when she was 8. She was attacked by a 14-foot tiger shark while surfing off Kaui's North Shore at age 13. Hamilton lost her left arm as a result. Through determination and faith in God, she was able to return to professional surfing. Hamilton has since won several national championships and written several books. Her autobiography, "Soul Surfer," was made into a major motion picture in 2011.

President Jerry Falwell, Jr. introduced Hamilton as a "source of inspiration" to millions of people around the world.

"Her story of faith, determination, and hope has captivated the attention of the national and international press," he said. "That film ('Soul Surfer') was one of the things that inspired us to start the Cinematic Arts, Zaki Gordon Center here. It showed us that Christian films could be done in high quality."

Hamilton shared her personal testimony with students, explaining how she coped with life after the attack.

"As I grew up with one arm and relearned how to surf, God taught me that He can take the hard times that I went through and turn them into something beautiful," she said. "I think that He can do that for each and every one of you. He can take what you have been through and use it for good if you are willing to share what He has done for you."

She also relayed to students the importance of living for God and using their passions to learn to overcome obstacles in life.

She reminded students that even though obstacles and trials may seem too difficult to bear, God is always working in the midst of them.

"I look back on my life now and I am just in awe that God can take a little girl from a tiny island in Hawaii and use my story all over the world to reach so many people," she said.

She recalled a trip she took to Thailand shortly after a tsunami devastated the country in 2004. While there she was able to minister to locals and help them overcome their fear of the ocean. She even got to take a group of children surfing.

Along with her influence as a professional athlete, Hamilton has been able to touch a large number of people with her own foundation, Friends of Bethany, which supports sharks attack survivors and amputees.

Carley Cottingham, a Liberty senior, spent her fall break in San Diego, Calif., at the "Beautifully Flawed" retreat hosted by Hamilton. The retreat was for young women who have gone through the tragedy of losing a limb.

When Cottingham was 17, she lost her right hand due to blood clots caused by an extra rib disorder she was born with.

"It has been four years since I have lost my hand, and I have never once cried about it or been upset and mad at God because He allowed it to happen for a reason," Cottingham said. "He knew I could handle life this way and would put a positive spin on it."

After losing her hand, Cottingham subscribed to Hamilton's foundation and began receiving emails and updates. She was able to apply and eventually be accepted for the retreat.

While there, Cottingham connected with girls who have gone through similar trials. She was also able to converse and surf with Hamilton.

"Being able to relate to girls who had gone through something similar as me was incredible," said Cottingham, who joined Hamilton after Convocation as she toured campus. "Bethany Hamilton is an inspiration to me and so many other amputees, and I am grateful I have found a friend in her."