Former National Rifle Association president Sandra Froman said of the dozen or so universities around the country she has visited this year, Liberty University is the first one where she actually felt safe in the room she was speaking.

Froman spoke Wednesday afternoon at Liberty University School of Law. Her visit came roughly two weeks after a Liberty Board of Trustees ruling went into effect allowing students, visitors, faculty, and staff with concealed-carry permits and permission from the Liberty University Police Department to bring weapons into all Liberty facilities except residence halls. The news has received national media attention.

She was the featured speaker for “American Universities: To Carry or Not to Carry,” an event sponsored by Liberty’s chapter of the Federalist Society for Law & Public Policy Studies.

The first Jewish person and only the second woman to serve as president of the NRA (2005-2007), Froman is a practicing lawyer in Arizona who remains outspoken regarding Second Amendment rights.

One of the questions she said she always asks gun control advocates is, “Do you think it’s more important to feel safer or to actually be safer?”

“Those people who argue against concealed carry on campus say, ‘We’ll all feel safer if there are no guns in the classroom.’ But will you really be safer?” Froman asked. “Do you think the criminals, the people intent on harm, the people who plan these horrific murders, are they going to obey the ‘No guns allowed’ signs and those laws when they decide whether or not they want to come and prey upon innocent people? If you do, I think you’re incredibly naïve.” 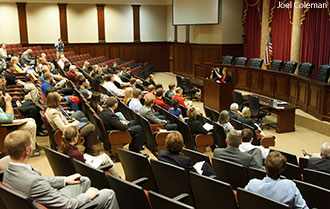 She asked students, professors, and concerned citizens in attendance Wednesday whether having guns on campus has led to an escalation in violent crime.

“At this school, in particular, where you place such importance on values and on accountability and personal responsibility, do people really change who they are when they cross that imaginary line between the public streets and the school campus?” she said. “I think not.”

Froman became a gun rights supporter more than 30 years ago at the age of 32, living alone in Hollywood Hills, Calif., after somebody tried to break into her house.

“I was more scared than I’ve ever been in my life because I didn’t know what to do,” she said. “I went the very next day to a gun store. I knew nothing about guns, (but) I knew that I needed something to equal the odds between me and somebody who wanted to hurt me. I became a safe and responsible gun owner.”

Soon after that experience, the California federal court tried to pass Proposition 15, a statewide handgun ban. Froman initiated a petition against the proposal, calling it a violation of her Second Amendment rights, and leading to her association with the NRA.

“I thought, ‘I am now a safe and responsible firearms owner, I am here to protect myself,’” she said. “‘What is the state trying to do to prevent me from protecting myself?’ I had never been political in my life. I got political real fast.”

Froman encouraged others to examine the issues and become activists, especially at such an important juncture in history.

“Right now, this subject matter is pretty much wide open for future development,” she said. “You are now at the very beginning of a Supreme Court jurisprudence about the Second Amendment. You’re watching history being made in your lifetime and it’s really exciting.”

She thanked administrators for the opportunity to speak at Liberty.