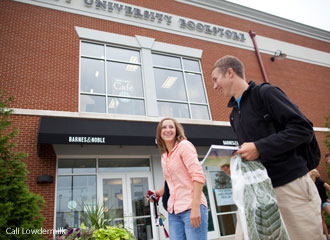 A recent study commissioned by the 41-year-old university shows its contribution is wide-reaching, from creating jobs, to generating local tax revenue, to nurturing community involvement by opening its recreational venues to the public and by encouraging students, faculty, and staff to volunteer hundreds of thousands of hours at charitable organizations each year.

Liberty pumped $342 million into Lynchburg and its surrounding counties during fiscal year 2011-2012. Since 2009, the university’s annual local financial impact has increased by a staggering 66 percent.

Just two years ago, a study by the same company, Mangum Economic Consulting LLC of Richmond, put Liberty’s annual local expenditures for 2009 at $217 million, about $125 million less than the university spent in fiscal year 2011-2012.

Thirty-nine percent of the 2011-2012 expenditures came in the form of wages and salaries for workers employed directly by the university.

The ripple effect of Liberty’s surging financial clout is being felt statewide. The study credits Liberty with creating more than 8,000 jobs throughout the Commonwealth to support the growth of a skyrocketing student body.

“This study reveals one of the key reasons why the Lynchburg region is prospering while growth is stagnant in other cities across the nation," said Chancellor Jerry Falwell, Jr. "Liberty is proud to be the driving force behind so many new jobs and economic growth. As Christians, we are admonished to feed the hungry and help those in need. What better way to do that than to create jobs, growth and prosperity?”

Liberty now enrolls nearly 100,000 students in its 320 undergraduate and graduate residential and online degree programs. Because of its innovative online study programs, Liberty is now the largest college in Virginia, the largest private, nonprofit, four-year college in the United States, and the world’s largest Christian University.

According to the Mangum study, 71 percent of Liberty students attend classes online. In comparison, publicly funded universities such as Virginia Tech and the University of Virginia have less than 27 percent of their students in non-traditional programs.

In the last five years, Liberty has emerged as a financial power as well, earning an AA bond rating that has fueled an aggressive facility makeover on its 6,819-acre campus. Since 2005, the university has added its own law school, a cinematic arts school, an engineering school, and has broken ground on a $40 million Center for Medical and Health Sciences, which will house the proposed College of Osteopathic Medicine.

Liberty is rapidly upgrading its athletic facilities as well, including a recent expansion of the football stadium and the addition of a new baseball stadium and basketball practice facility. It is also seeking NCAA Division I Football Bowl Subdivision (FBS) conference affiliation for the benefit of its athletics program.

Over the past few years, Liberty has expanded its bookstore and constructed a new welcome center,  embracing the same Jeffersonian architecture that characterizes all new building projects on campus.

This year, Liberty began construction on the $50 million state-of-the art Jerry Falwell Library alongside an envisioned lake and lawn. This academic nerve center of campus will soon be complemented by the first of four eight-story residence halls. Construction will begin in early 2013.

All of this activity means that jobs have been created at Liberty and at the hundreds of local businesses that support the function of its campus. Because of the university, a dominant new retail corridor has sprung up in Lynchburg, which now provides a significant portion of the city’s sales tax revenue.

Liberty is directly responsible for 10 percent of Lynchburg’s meals tax revenue and 19 percent of the city’s hotel and motel tax revenue. The university generated approximately $6 million in tax revenue for the city in fiscal year 2011-2012.

Spending by Liberty students and campus visitors account for more than $81 million annually in the local economy, according to the study. On average, Liberty students spend $505.77 per month with local businesses. They welcome visitors about three times a year, each spending, on average, $201.27 per visit.

The study also shows Liberty has provided some muscle for an otherwise sagging Lynchburg economy.

“At the height of the 2007 recession, between fiscal year 2008 and fiscal year 2009, while the city of Lynchburg as a whole experienced a 4 percent decline in total employment, employment at Liberty University actually increased by 642 jobs or 25 percent,” the Mangum study found.

The Mangum study points to the region’s job data and “the important role that Liberty University plays in the Lynchburg MSA in expanding the region’s portfolio of high growth, non-manufacturing sectors, and thereby providing a stabilizing influence on the region’s employment picture.”

Liberty had a similar impact on the once downward spiraling Lynchburg population figures. Lynchburg’s population, which influences its state aid, began to surge as Liberty hit its growth spurt over the past decade.

Beyond the university’s expenditures, its students provided 648,579 hours of volunteer service to organizations such as the American Red Cross, Boy Scouts, Girl Scouts, local churches, humane societies, and the Salvation Army in 2011-2012.

At the current minimum wage, the value of volunteer labor provided by the Liberty family would be worth an estimated $5.5 million.

Additionally, Liberty’s agreement with the Greater Lynchburg Transit Company has eased traffic congestion in and around campus and allowed the public transportation company to upgrade its fleet with fuel-efficient and environmentally friendly buses.

Liberty has also provided the region with unique recreational facilities, such as the LaHaye Ice Center and the Liberty Mountain Snowflex Centre, the only year-round ski slope of its kind in North America. Both are open to the public.