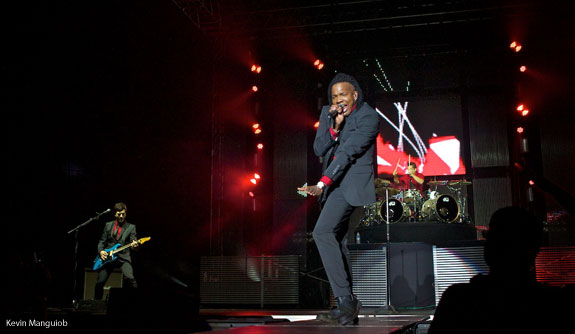 Alumnus Michael Tait performs with the Newsboys during the College for a Weekend concert on Saturday, March 24 in the Vines Center.

Liberty University alumnus and superstar Christian rock artist Michael Tait took the stage at the Vines Center Saturday night, his first time at Liberty since assuming the lead vocal role for the Newsboys.

The event was part of Liberty’s College For A Weekend lineup. The band electrified the audience for 80 minutes, performing their latest hits, including “Born Again” and “God’s Not Dead,” as well as some classics like “He Reigns.” The audience also got a treat as they heard the band play “Jesus Freak,” a hit single of Tait’s first band, dc Talk, which formed while he was a student at Liberty from 1984-89.

Prior to his performance, Tait took time to tour campus with Alumni Relations director Tyler Falwell, exploring new landmarks such as the Liberty Mountain Snowflex Centre and the Liberty University Barnes & Noble bookstore. 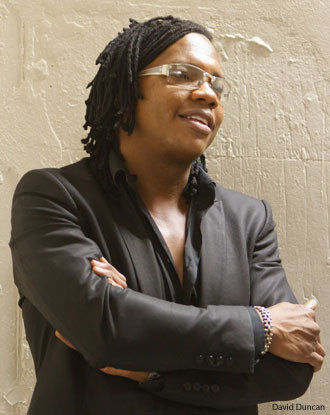 “It was overwhelming, to see (Liberty) grow into what it has — the buildings, the kids … it’s the largest private (non-profit, four-year) university in the country,” Tait said. “That’s what Doc (Dr. Jerry Falwell Sr.) wanted; let’s call it a legacy. I am glad to be a part of it.”

He made appearances at some of the dormitories on campus, including a visit to Dorm 23, third floor, where he stayed as a freshman in 1984 and Dorm 6, Room 107 (formerly Room 10). Tait reminisced about his time in that room, which is where he and Toby McKeehan first formed dc Talk.

He described how they wrote the group’s first single, “Heavenbound,” in a makeshift teepee in the room.

“We had no clue, no idea where (dc Talk) would lead,” Tait said. “The first time we performed that song was in Jerry (Falwell, Sr.)’s back yard, at the pool at Jonathan Falwell’s party.”

Tait was choked up with emotion several times during his campus tour, none so touching as his visit to Dr. Falwell, Sr.’s memorial.

“It was just overwhelming because I just had such a passionate, heartfelt love for Jerry. That man really left an impression on my life,” Tait said. “He is a big part of the way I live my life today.”

During his tour, Tait introduced himself to four current students as they ate in Reber-Thomas Dining Hall.

“He walks in, and I’m like ‘Whoa, it’s Michael Tait,’ and he just walks up to our table and starts talking to us,” said sophomore Corey Fields.

Tait made a connection with the four students almost immediately and invited them to the show and to hang out backstage after the concert.

“It was just a great experience,” freshman Terey Hackney said. “(Later that afternoon) he pulled up in front of our dorm and handed us the tickets.”

The foursome, which also included Terey’s twin brother Terrell and freshman Kimoni Hairston, had no idea Tait was going to be in the dining hall, and were not even planning on sitting together that day. They credit the meeting to God’s divine providence, as all are friends and share a love for ministry and music.

Though they do not have a band together, the four each have their own individual music projects, and since the meeting with Tait have discussed beginning a group – a group they hope to use as a ministry to the community.

Tait spent a few minutes with the students after a VIP meet and greet, where the Newsboys answered fan questions and performed an acoustic rendition of “The King is Coming.”

Hairston said Tait asked to hear a sample of his music.

“I didn’t have a demo on me, so I rapped for him,” Hairston said. “I love the way that he is famous, but he took the time to talk to us.”

Backstage after the show, they exchanged numbers with the intent to reconnect next time he is in town. During their time together, Tait shared some of his own experiences and some words of wisdom with the group, but also took the time to mentor and learn more about them.

“He was motivating us to focus on God first and just let God’s will be done, to build a strong foundation around God. This really inspired me; to see someone who is humble like that – I really want to write music now and just make sure that God is shown through me and how I sing,” Terrell Hackney said.

“You can really see the love of Christ in him, the way he interacted with us, it was like he knew us,” Fields added.

Tait last visited Liberty in October 2008, when he performed during Homecoming with his band “Tait.”

While a student at Liberty, he sang with Light, a touring ministry group. Tait is the brother of gospel music recording artist Lynda Randle, also a Liberty alumnus.

But he is most known for his time with dc Talk, the Christian rap/rock supergroup that pioneered the landscape for modern contemporary Christian music and is heralded by the Encyclopedia of Contemporary Christian Music as the “most popular overtly Christian act of all time.” Kevin Max, also a Liberty alumnus, joined McKeehan and Tait in the group.  They have not officially broken up, but have been on hiatus since 2000 when the members agreed to part and work on their own solo projects.

The Newsboys formed in 1985 and has seen several lineup changes since its inception. In 2009, longtime front man Peter Furler – one of the group’s two founding members, vocalist and writer/producer – decided to step down and assume a behind-the-scenes role for the group. Tait agreed to take over as the group’s new lead vocalist and front man, beginning what the group often refers to as Newsboys 2.0.

Since taking the reigns from Furler, Tait has assumed a leadership role, helping the group springboard back to the top of the scene with a reinvented mainstream rock sound and unapologetically Christian lyrics. Their current tour, “God’s Not Dead” is the band’s largest to date, hitting over 60 cities nationwide this spring.

The Newsboys are led off by up-and-coming acts The City Harmonic, Abandon and Anthem Lights, a band made up of four Liberty alumni – Alan Powell, Caleb Grimm, Chad Graham and Kyle Kupecky.