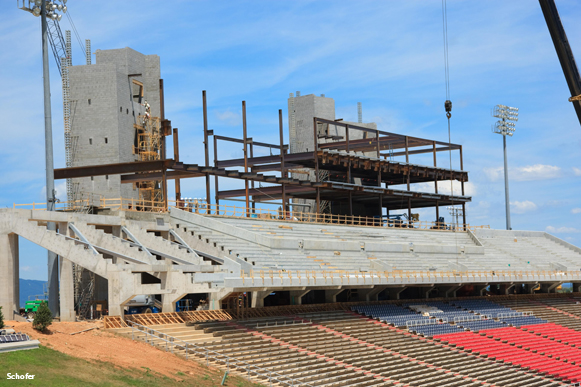 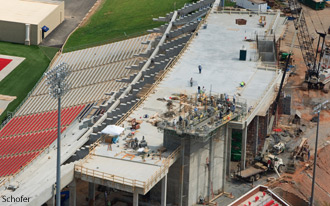 Summer is normally the time for rest and relaxation, but not on the Liberty University campus. Crews are working hard at several construction sites to complete projects before the start of the fall semester.

Driving by campus, one cannot help but notice the large crane hoisting blocks of concrete over Williams Stadium, as the $16 million expansion project is well under way. The work includes an additional 6,600 seats and a brick- and glass-encased, Jeffersonian-style five-story tower that will house 18 permanent luxury suites, a banquet room that will seat up to 800 people, a 1,000-seat classroom and a state-of-the-art press area. There will also be new concession stands and restrooms. The biggest challenge has been installing two elevator shafts for the building.

“That’s what’s driving the whole project — when those two shafts get up, then everything can be built around it,” said Charles Spence, Liberty’s director of planning and new construction.

He said the project is by far the largest one with the highest price tag that Liberty has ever taken on. He said he can only recall two other times when the school took on such a challenging endeavor.

“In 1989 and 1990, when we built the original football stadium and the Vines Center, and when we took [Arthur S. DeMoss Learning Center] up three additional stories in 2000, both of those were as hard and complicated — this one’s on the same level.”

The project officially launched on Jan. 4.

Go to www.libertyflames.com for regular updates, photos and a camera that captures updated images of the construction every 30 minutes.

Adjacent to the stadium is another project that will boost Liberty’s athletics program. The STOC (Soccer/Track Operations Center) will be completed in the next week. It is part of an overhaul of the Matthes-Hopkins Track Complex and Osborne Stadium.

“With donors’ help, we’ve put over a million dollars into the whole complex over the last year, including the center, the seating, the fencing and scoreboard improvements,” Spence said. 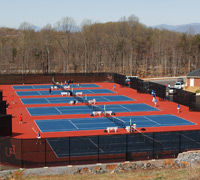 The center itself was a half-million-dollar project.

Also on task for athletics this summer are six new NCAA-regulation tennis courts to add to the six courts that were completed near Regents Parkway last fall. 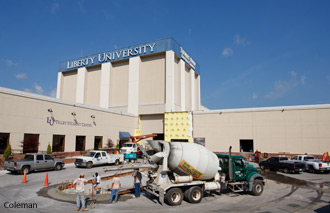 The second-largest construction project to be completed on campus this summer will enhance one of Liberty’s fastest growing academic programs. The university expects to receive the certificate of occupancy this week for the Tower Theater at Campus North.

The $6 million project is a contemporary-style 600-seat theater consisting of balcony seating, an orchestra pit, catwalks, a fly tower (an intricate system of ropes and pulleys that can move Broadway-size sets and scenery), a box office and 12,000 square feet of support area that includes dressing rooms, a practice room, offices, costume shop, prop room and woodworking and scene shops.

The main theater will first be used to host children’s summer camps, a perfect trial period for the theater department, Spence said. “They’re going to start playing with their new toys and adjusting and tweaking the systems this summer,” he said. Meanwhile, workers will be able to focus on the support space.

Spence said people “will never believe it was an old storage warehouse when we get done with it here.” He said those who have already viewed the progress have used words like “outstanding,” “takes your breath away,” and “overwhelming.”

“Theaters are tough construction, with complicated systems, but everything is going fantastic. It’s finishing with a really, really nice look.”

Other construction projects in high gear this summer include: