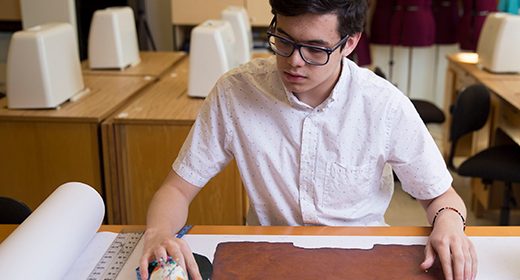 Liberty student Luis Quijano was shocked when he found out he was a Fulbright Scholarship finalist.  When he found out, he knew his dream was becoming a reality.

Quijano, a Liberty graduate, previously applied for another Fulbright grant but was rejected and has been teaching English in Thailand while waiting to hear whether or not he would receive the second grant.

Not only did Quijano recently receive the scholarship, but he is the first Liberty student to become a Fulbright research finalist in the school’s history. With this grant, Quijano will be conducting research to develop bacterial cellulose as a leather-like material for the textile and apparel industry.

“I think bacterial cellulose has the potential to become a real textile in the fashion industry, commercial textiles. We see in the news and fashion media, they love to showcase these topics, however I really want it to be there,” Quijano said. “Not just hype or media, but something real that people can actually wear.”

He will be completing his PhD at the Queensland University of Technology in Brisbane, Australia, collaborating with Dr. Alice Payne in the Faculty of Creative Industries and Dr. Robert Speight in the School of Biology and Environmental Sciences. On top of the two-year Fulbright Future Scholarship, Quijano received the Australian Government Reseach Training Program Stipend, funding his third year of his PhD program.

“I just want people to know you should be strong in these applications and not give up,” Quijano said. “If this is something you really want to do, you maybe have to apply for a couple years.”

Instead of waiting until he can officially begin his research, Quijano has started some preliminary research . Due to COVID-19, his July 2020 start date could be set back.

“I’ve been starting to get some of the assignments and things done for the PhD done so I can save time,” Quijano said. “I want to save time so I can do the real research when I get there.”

Quijano said the fashion industry is all about sustainability and eco-friendly materials but is the second highest pollutant in the world. His research would help eliminate pollution and waste in the industry. His design would also be eco- and health-friendly. There will be no hazardous chemicals used for the textiles.

Dr. Randall Hubbard, a faculty member in the Department of Biology & Chemistry, became a mentor and a significant help to Quijano when he began his initial research on bacterial cellulose growth while at Liberty.

Liberty professor Edna Udobong is the Fulbright program advisor and scholar liaison and has helped Quijano with applications and preparation.

“His commitment is just exceptional, and I am so happy he got the award this time and it adds even more to his current award,” Udobong said. “Advising him was one of the best things to ever happen to me, especially as an advisor because he was always willing to do a lot of things, (other) candidates do that as well, but his commitment was just exceptional, outstanding.”

Quijano said he owes credit to Liberty for helping him achieve his award and goals. Liberty previously assisted Quijano financially when he received the Provost’s Award for Research Excellence, allowing him to conduct research in Australia during the summer of 2017. He also received Student Research Presentation Awards from the Liberty’s Center of Research and Scholarship, helping him attend the 8th international Istanbul textile Congress in Turkey to present his research.