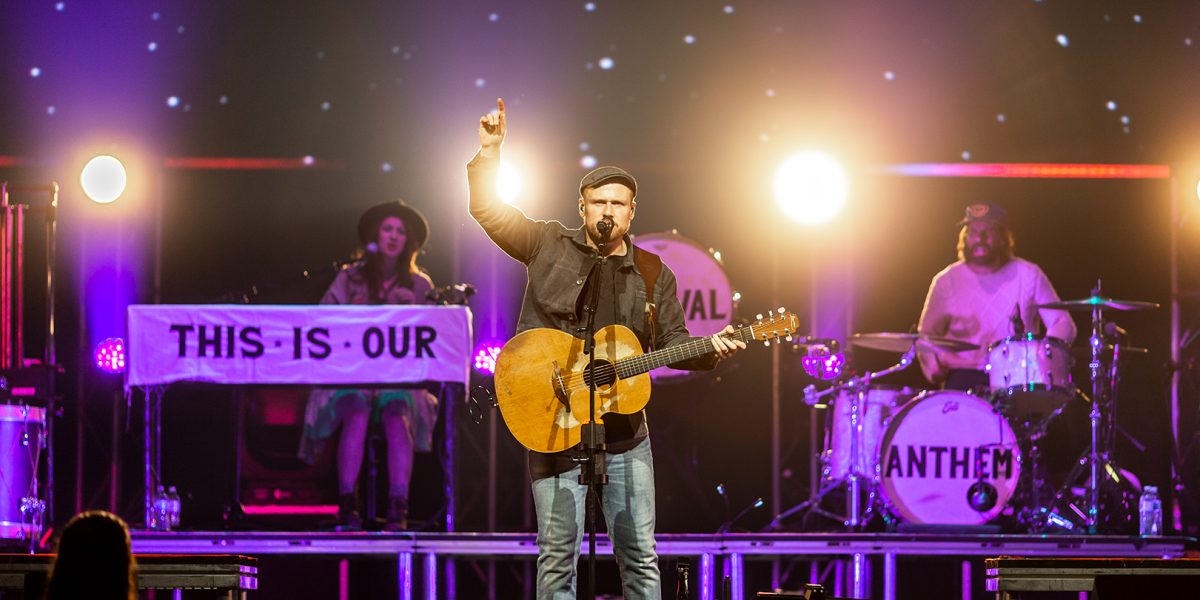 It was an interesting combination – a country singer paired with an Irish folk band – but together, they put on a night of worship unlike any other.

Students and guests gathered together in the Vines Center Saturday night to hear from Rend Collective on their Revival Anthem Tour. As a precursor to the event, Emily Ann Roberts, a faith-based country singer whose music career started on “The Voice,” took the stage to play songs from her newest EP, “Someday Dream.”

The spellbound audience tapped their hands and feet to her songs of praise and love. With a deep southern accent and country twangs, she recounted how blessed she felt to be standing on stage.

“God has given me so many incredible opportunities in country and in Christian (music), and I am so thankful,” she said.

Roberts performed songs about friendship, the support of family and God’s love. Her hope is that the fame never gets to her head – even though her name has been written in magazines.

After a couple of songs about the resurrection and reminders that death has been defeated, Roberts took a moment to discuss how fame has impacted her self-image. As she rises in fame and becomes popular on social media, she has to remind herself that her worth is not in her music or popularity, but in her relationship with God.

“So many things (are) telling us who we should be and who we are, and the only voice that matters is the Lord’s,” she said.

After Roberts left the stage, a 45-minute intermission commenced. They showed a short film by World Vision, asking people to sponsor a child as one member of Rend Collective got on stage to share his story of how he was chosen as a sponsor by a child in Honduras, and the impact it has made on his life.

When the intermission ended, Rend Collective took the stage. They began with “Revival Anthem,” a song filled with biblical analogies and historical references, from the dry bones passage in Ezekiel to the American Great Awakening.

They brought a chaotic energy to the concert, inviting the audience to move around with them.

“The best way to get undignified is by participating in some Irish dancing,” lead singer Chris Llewellyn said.

At different points in the songs, streamers burst from the ceiling and bubbles roamed over the audience, matching the playful mood of the band. They knew that their antics could be considered over-the-top, but they had a purpose. Joy, not seriousness, was a fruit of the Spirit, Llewellyn said, and Christians should be rejoicing all the time because of our eternal hope.
“We get it,” he said. “Sometimes it is hard … to worship. We worship because God is good, not because we feel good.”

For them, it is not just about the music.

“We’re here to celebrate the goodness and faithfulness of our God,”
Llewellyn said.

They remembered God’s faithfulness in “Counting Every Blessing” and sang of his forgiveness in “Unconditional,” reminding the audience that God does not expect perfection from his children.

The climax of worship came during “The Art of Celebration,” a ballad about how God’s mercy and grace are never inaccessible to us if we run towards him. When we are covered by Christ’s blood, the song said, we are welcomed into the throne room of heaven, welcomed as God’s own, without fear or judgment. Audience members raised their hands as Llewellyn’s voice filled the Vines.

When the song ended and everyone stood meditating on the message, the band exited the stage as drummer Gareth Gilkeson told the biblical story of the prodigal son. He spoke on how the son’s “dreams turned into a living nightmare” and how even though he had hurt his father deeply, the father still ran to him, welcoming him home.

“All God cares about tonight is that you come home. … You can come running home tonight because you know there is a Father running towards you,” Gilkeson said.

He prayed an invitational prayer and rejoiced when he saw people shine their phone flashlights to signal they had accepted salvation for the first time. Over 500 people have given their lives to Christ on this tour, he said.

The band returned to play some crowd favorites off of old albums, including “More Than Conquerors” and “My Lighthouse,” ending their set of original songs with “Marching On,” a commission to keep spreading the light of the Gospel. Then they launched into covers of popular Christian songs such as “What a Beautiful Name” and “I Love You Lord.”

Lights dimmed and instruments silenced as the audience sang the final song. When the lights came back up, the band had disappeared, reaffirming their final prayer of the night: “We want it to be (God’s) name we carry out of here in our hearts and minds.”

Tour dates and more information for Emily Ann Roberts and Rend Collective can be found on rendcollective.com.