Ready for the task 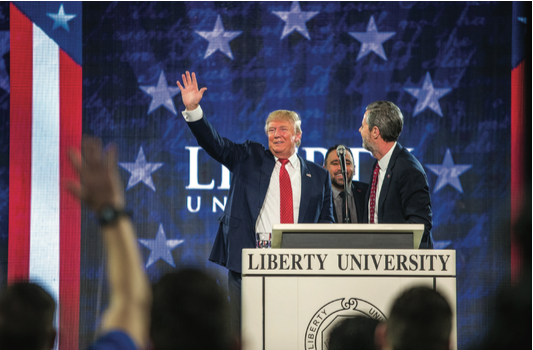 Falwell said the membership of the task force has not yet been determined and will not officially be formed until the Trump administration takes formal action later this year.

Falwell’s personal goal while leading the task force will be to roll back Department of Education (DOE) regulations — many of which were put in place by the Obama administration — that he believes are overreaching and create too much federal intrusion into the private affairs of universities and regional accrediting agencies.

“Several regional accrediting agencies have very competently monitored the operation, governance, academic quality and management of hundreds of non-profit colleges and universities across the nation for generations,” Falwell said.

“In recent years, these accrediting agencies have faced heightened scrutiny and micro-management from the federal government that I believe is unnecessary.”

Falwell, who has long been a vocal advocate for less federal bureaucracy in the higher education system, argued these regulations harm rather than help universities from making strategic decisions to benefit their programs and give an unnecessary level of power to the (DOE).

“I’ve seen firsthand what the Department of Education is doing to college and universities, using the leverage of financial aid to micro-manage college and schools with regulations that are overly burdensome,” Falwell said in an interview with the Wall Street Journal.

One regulation Falwell specifically critiqued was a new set of rules passed by the Obama administration known as the Borrowers’ Defense rules.

The regulations were formulated in June 2016 following the collapse of Corinthian Colleges wherein the federal government received a flood of borrower defense claims from students citing misconduct on Corinthian’s part, according to the text of the regulations.

The text is more than 900 pages long and states that the regulations seek to create an updated and clarified Federal process to improve the borrower defense program and increase protections for students to prevent fraud and abuse in the higher education system from going unchecked.

“Most postsecondary institutions provide a high-quality education that equips students with new knowledge and skills and prepares them for their careers,” the official text of the Borrowers’ Defense rules said.

“However, when postsecondary institutions make misleading statements to students about school outcomes or financing needed to pay for those programs, student loan borrowers may be eligible for discharge of their Federal loans.”

Specifically, the regulations will require schools to notify the government of any judicial filings, amend the definition of misconduct to include omissions of information, and prohibit predispute arbitration agreements by schools, among other things.

Falwell said he especially disagrees with the latter of the new rules.

Prohibiting predispute arbitration agreements between the schools and its borrowers, he said, creates a process for student borrowers to complain to the DOE without adequate opportunity for colleges and universities to participate in the process and answer the complaints.

According to Falwell, this would allow the DOE to “play favorites” by requiring some universities to repay student loans while giving others a free pass.

Falwell’s appointment to the task force came after he and Trump discussed Falwell serving in the Secretary of Education role in November of last year.

Falwell said he was unable to serve as Secretary of Education for more than two years, while Trump needed a four to six-year commitment.

Falwell said he believed he had too much unfinished business at Liberty, but working on the task force allows Falwell to stay with his family in Lynchburg and keep his role at Liberty.

Falwell has since applauded Trump for his appointment of American businesswoman Betsy DeVos to the Secretary of Education position and said he had an opportunity to talk with her and exchange ideas on the future of education policy during Trump’s inauguration ceremonies.

More details on Falwell’s task force will surface as it seeks a specific course of action and becomes an official asset of Trump’s administration later in the year.

YOUNG is the news editor.