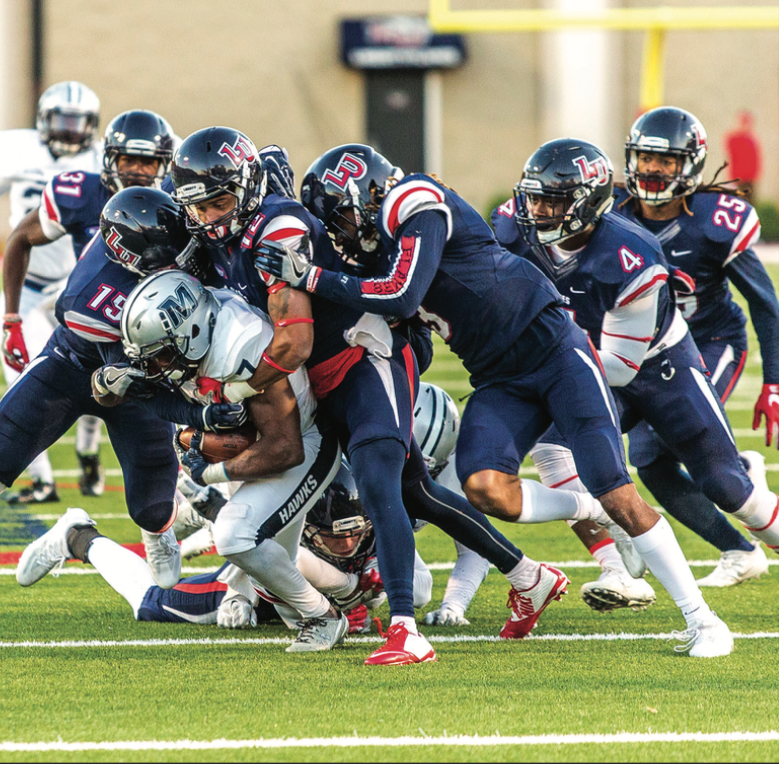 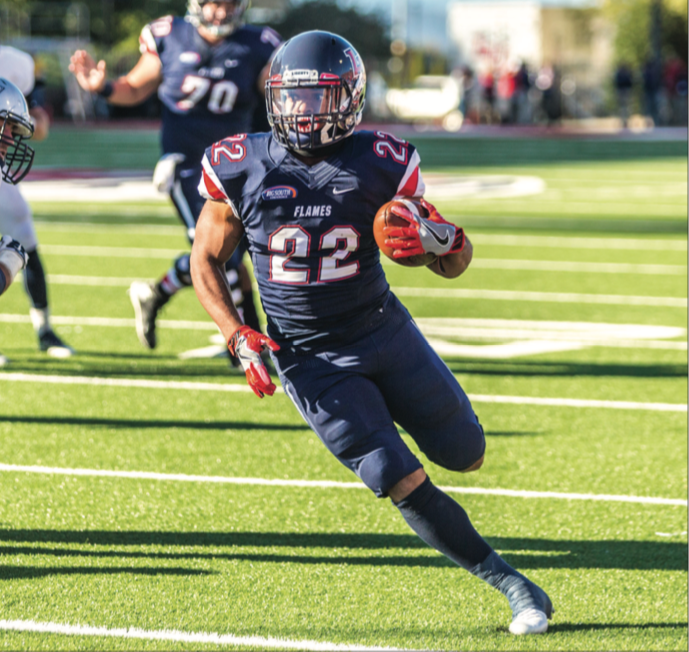 HOT — Running back Todd Macon finished the game with 271 all-purpose yards, tied for fifth most in one game in school history. Photo credit: Michela Diddle

The Flames tallied a season high of 681 yards of total offense in front of the largest home crowd of the 2016 season.

For Flames Head Coach Turner Gill, it was nice to see his team come out and maintain control of the contest against the visiting Hawks.

“I like the direction we’re headed,” Gill said. “We’re moving in the right direction. We still (have) some things we need to work on, but I love the way we’re improving as a football team. We’re now getting better every single week.”

The Flames offense was led by the arm of freshman quarterback Stephen “Buckshot” Calvert, who made his third career start under center for the Flames — going 27-34 throwing for 350 yards and three touchdowns along with two interceptions.

“When my teammates are playing as good as they are, it’s easy to come out with a win,” Calvert said.

“We came out and did what we had to do. It felt good. We stuck to the game plan. All we had to do was execute. We’re definitely getting into a groove, but we can’t settle for anything less. We’ve got to keep pushing forward and continue to fight each week.”

Joining Calvert in the backfield was junior running back Todd Macon, who had one of his best games in a Flames uniform.

“(Macon)’s done a great job,” Gill said. “He runs with great determination, has good vision and knows how to run over people and make people miss.”

After battling an injury to his foot, Macon said he was more than happy to get back out on the field with his team.

“The big key for me was getting in a rhythm and being patient,” Macon said.

“Once I was patient, the offensive line was able to get to their blocks, and the holes opened up.”

The Flames wasted no time on offense to start the game, with Calvert taking the offense on an 11-play, 74-yard opening drive in 4:29 that was capped off with a perfectly thrown back-shoulder pass to senior wide receiver Dante Shells for the first score of the afternoon.

The Hawks fumbled the ensuing kickoff, and the Flames recovered inside the Hawk’s 10-yard line.

The Flames were not able to capitalize, turning the ball over on downs after the Hawks defense stood tall on a fourth down on the 1-yard line, stuffing Flames junior running back Carrington Mosley for no gain.

Taking over a few inches from his own goal line, Hawks sophomore quarterback Cody Williams faked the handoff in his own endzone and threw a deep post route to senior wide receiver Darren Ambush, who made it 77 yards down to the Liberty 22-yard line before Flames sophomore cornerback Chris Turner stripped the ball out of his hands as he was tackled.

The Flames recovered and took possession at the 22.

“That’s a big play,” Gill said. “That’s an effort play. Chris Turner didn’t give up on that play even though it wasn’t his responsibility. He kept running, and that’s why you always play hard every
single play.” 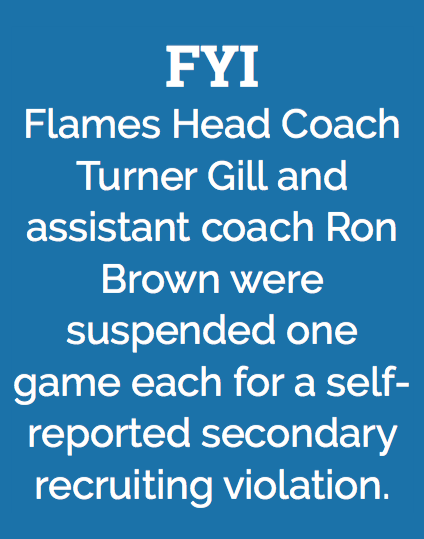 Calvert led the offense back on to the field, but they didn’t stay very long. On 1st-and-20 at his own 24, Calvert audibled to a screen pass, connecting with Macon out of the backfield, and Macon charged down the sideline for a 76-yard touchdown to give the Flames a 14-0 lead with 5:59 left in the first quarter.

The Monmouth offense retook the field on the ensuing possession, going three-and-out, but a muffed punt from Flames sophomore returner B.J. Farrow recovered by the Hawks gave them possession in Flames territory for the first time in the game. The Flames secondary tightened up, forcing three straight incomplete passes and a Monmouth punt.

The Flames finished the first quarter with 251 total yards compared to 85 for Monmouth.

With 11:21 left in the second quarter and the Flames driving in Hawks territory, Macon got the handoff from Calvert and bounced outside, scoring his second touchdown of the day from 11 yards out, giving the Flames a 21-0 lead.

The run was set up by a long pass from Calvert to freshman wide receiver Antonio Gandy-Golden on a third down conversion.

Monmouth got the ball back, and finally started putting an offense together.

A 34-yard run from senior running back Lavon Chaney got the Hawks into Flames territory at the 45.

The Hawks moved at an up-tempo pace, never allowing the Flames to set up properly for the next play, as Williams lofted a 45-yard touchdown pass to a wide-open Ambush for the Hawks’ first score of the game.

Calvert led the offense back onto the field and produced more points.

Mosley took a handoff and pounded into the endzone from 6 yards out to give the Flames a 28-7 lead with 8:13 left in the second quarter.

The Flames added a field goal from freshman kicker Alex Probert later in the quarter to take a 31-7 halftime lead into the locker room.

After forcing the Hawks to punt on their opening possession of the second half, the Flames offense picked up right where it left off.

On 1st-and-10 from his own 31, Macon took another handoff straight through the interior line and burst into the secondary for a 65-yard gain to the 3-yard line — the longest run of his career.

Calvert found Gandy-Golden in the back of the endzone two plays later for his third touchdown of the day through the air, giving the Flames their largest lead of the day with a
score of 38-7.

Monmouth went three-and-out on their next possession, and the Flames found themselves faced with a 4th-and-3 at the Hawks 32-yard line.

Calvert rolled out, and his pass was tipped and intercepted by senior free safety Teddie Martinez at the 28.

The Hawks brought in redshirt freshman quarterback Kenji Bahar to lead the offense for the rest of the game.

The next two Monmouth drives resulted in 2-yard and 1-yard touchdown scores from senior running back Zach Welch to make the score 38-21 with 1:56 left in the third quarter.

STUFFED — Flames defense held the Hawks to 7 points in the firrst half. Photo credit: Michela Diddle

After a Flames punt in the ensuing possession, the Hawks found themselves with a 4th-and-1 from their own 47-yard line.

Bahar took the snap and handed the ball to senior back Lavon Chaney who ran, untouched, through the line for a 53-yard touchdown to make the score 38-28 with 12:48 left in the fourth quarter.

“(Monmouth) made some adjustments,” Gill said. “We had linebackers and safeties that didn’t put the gaps where they needed to be. It took us a little bit too long to make our own adjustments.”

The Flames responded with a 9-play, 75-yard drive that ended with Macon’s second rushing touchdown of the day and extended the Flames lead to 45-28.

On the next Hawks drive, Bahar was intercepted by Flames cornerback Tyrin Holloway, who made a one-handed catch and returned the pick down to the Monmouth 46-yard line.

The Flames put the game out of reach with a 13-play drive that took almost six minutes off the clock, ending with an 8-yard touchdown run from Mosley to mark the final score 52-28.

“I’m very proud of our coaches. They did a great job of preparing our players. Now we’re going to move forward and prepare for Gardner-Webb.”

Gill, along with assistant coach Ron Brown, was suspended one game for a self-reported recruiting violation.

Brown served his suspension against the Hawks. Gill will serve his at a later date, according to the News & Advance.