Editor’s Note: In an interview with the Liberty Champion, Jerry Falwell answered questions about some of the controversial issues regarding his personal support of Donald Trump for president. Liberty University does not support or oppose any political candidates.

Beginning as a multiple year friendship with Donald Trump, Falwell’s personal connection with Trump has transformed into a political backing for the upcoming presidential election.

Falwell said his friendship with Trump began when Trump first spoke at Liberty in September 2012. Falwell said he kept in contact with some members of the top management of Trump’s company and has recently had the opportunity to get to know Trump’s family.

Falwell said he has been focused on running the university, but he did spend time on the campaign trail with Trump during the weekend of the Iowa caucus.

Falwell said he was not expecting what Trump would later ask him to do.

“I showed up (at) an auditorium packed with thousands of people,” Falwell said.

“I said, ‘What am I here to do?’ They said, ‘You’re the moderator.’ I said, ‘Okay.’ So they handed me a microphone, and they said, ‘Welcome Jerry Falwell Jr.,’ and I’m walking out on stage in front of thousands and that was it. I introduced him, and then I sat down, and he and I just sat there in chairs for about an hour and discussed the issues.”

A university president and lawyer by trade, Falwell said he asked for some help before moderating.

“Luckily I had texted Sean Hannity earlier that day and said, ‘You do this all the time. Give me some ideas of some issues I should discuss with him,’” Falwell said. “So Sean texted me from his son’s tennis match some ideas of what to ask him. I used some of those ideas.”

Trump then asked Falwell to stay the night and follow him on his campaign stops for the next day.

“We went to the airport, and there was Trump’s 757 all lit up on the runway,” Falwell said. “So we walked on the plane, and we thought we certainly would be sitting in the back with Secret Service. But he said, ‘No, come on up.’ He brought us up front. He’s got this big living room with this big screen TV. He’s got a master bedroom he showed us. Then he let my son and his wife actually sit in the cockpit to take off because my son’s a pilot. Then we sat there with him the whole time, just across the table.”

Falwell said he was impressed by Trump’s hospitality on the flight.

Falwell said he and his family followed Trump to Council Bluffs, Iowa and Sioux City, Iowa where he moderated for Trump before coming back to Lynchburg.

“It was an experience of a lifetime, but it was a lot of fun,” Falwell said.

According to a statement released by Trump’s campaign in January, Falwell acknowledged why he chose to support Trump.

“(Trump) is a successful executive and entrepreneur, a wonderful father and a man who I believe can lead our country to greatness again,” Falwell said in the statement.

Falwell has continued his support of Trump because he believes Trump is the businessman and not the politician the U.S. needs to be restored to a healthy condition.

“He is not part of the establishment,” Falwell said. “He’s been a businessman all his life, an entrepreneur. He’s not a career politician. He hasn’t been groomed to say all the right things to all the right crowds to get their votes. He’s just himself.” 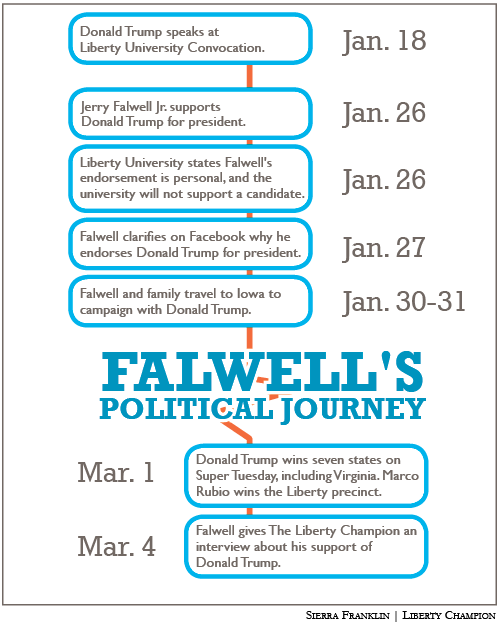 Falwell said he believes recent remarks in opposition of Trump are conditioned politicians scared of change.

“I really believe that what you are seeing happening this week is the establishment is having a seizure,” Falwell said. “They’re going ballistic because they are scared to death that they’re going to lose power. … They’re scared to death of Trump because he’s the kind of guy that will walk into Washington, kick over the tables, kick over the chairs, throw the bums out, start over, and do things that a career politician would never do.”

Falwell emphasized the importance of the fact that Trump has not held elected office before.

“I think he is what our Founding Fathers envisioned — citizen legislators — not career politicians to run this country,” Falwell said. “(They were) people who had their own businesses, their own jobs and who would take a break from that for a while to serve their country and then go back to their profession, not make a career out of being a politician on the tax payer payroll. I think Donald Trump fits that definition better than anybody else because he has been extremely successful in the private sector.”

Falwell, who was working for Liberty during its early financial struggle, said he admires Trump’s business skills. He thinks Trump’s skills will translate into an ability to help the U.S. recover from its almost $20 trillion debt.

“He doesn’t need the money,” Falwell said. “He’s paying for his own campaign. He’s not beholden to anybody like the rest of them are. He’s made a payroll with tens of thousands of employees, and nobody else on that debate stage has ever made a payroll and never will. They don’t understand it. They don’t know what it’s like to be a businessman who is trying to survive or a businesswoman who is trying to make it. …. Trump does. … I come at it from a unique perspective because I’ve been through experiences that most people haven’t. Keeping a school afloat for 20 years was my job as a young lawyer. I know what it takes, and I want somebody who’s done that.”

Trump has taken some opposition from religious leaders who remain in disagreement with his policies. According to CNN, Pope Francis said Trump “is not Christian” if he wants to build a wall between the U.S. and Mexico and deport undocumented immigrants.

However, Falwell said he thinks evangelicals should think about elections differently this time around.

“In the past (evangelicals) would vote for somebody who claimed to share their views on social issues, but promises were almost never kept,” Falwell said. “Evangelicals and conservatives were betrayed repeatedly by politicians who had claimed to be conservative socially and fiscally as candidates but went a different direction once they took office. Now I think conservatives have reached a point where they want somebody who has succeeded in the private sector, not just someone who makes the right promises in speeches. Many of them see Donald Trump as the tough guy who will protect and defend
us in perilous times.”

“He’s perfectly suited to serve as the political leader, and I think that gives evangelicals comfort,” Falwell said. “That’s why a large majority of them are supporting him, and I think maybe after the country is saved and restored, perhaps evangelicals will start voting in traditional patterns again.”

He said saving the country from terrorist attacks, runaway debt and open borders has to be the first priority.

“All the other issues will be moot if we don’t save the country,” Falwell said.

“When we step into our role as citizens, we need to elect the most experienced and capable leaders,” Falwell said on Facebook Jan. 27. “As I said, Jimmy Carter is a great Sunday school teacher, but the divorced and re-married Hollywood actor Ronald Reagan saved this nation when it was in nearly the same condition that it is today. Jesus said judge not, lest ye be judged. Let’s stop trying to choose the political leaders who we believe are the most godly because, in reality, only God knows people’s hearts. You and I don’t, and we are all sinners.”

Despite disapproval by some Liberty alumni and others in the community, Falwell believes Trump gives America the best chance to be great again.

“It is sad to see Christians attacking other Christians because they don’t support the same candidate or the candidate who they believe is the most righteous,” Falwell said.

“God called King David a man after God’s own heart even though he was an adulterer and a murderer,” Falwell said. “You have to choose the leader that would make the best king or president and not necessarily someone who would be a good pastor. We’re not voting for pastor-in-chief. It means sometimes we have to choose a person who has the qualities to lead and who can protect our country and bring us back to economic vitality, and it might not be the person we call when we need somebody to give us spiritual counsel.”

Because of Falwell’s position at Liberty, he had the university release a statement Jan. 26 stating the university does not endorse or oppose political candidates. It also said Falwell’s choice to endorse Trump is a personal choice and not a decision as the role of university president. Liberty cannot legally endorse a candidate for presidency and keep its nonprofit, tax-exempt status as a university.

Falwell also addressed the rumors that contributions were made so Falwell would support Trump for president.

“Trump has never made any contributions to Liberty or to me or to my family,” Falwell said. “Neither has (he) promised any donations. It has never even been discussed.”

Liberty students came out in full force March 1, the presidential primary in Virginia. Students cast 1,215 votes at the Vines Center with 90 of them for Trump. Though Trump did not win the Liberty precinct, Falwell said on Twitter that he was “proud of @LibertyU students for voting their conscience today and thinking for themselves unlike those at many univ who blindly follow admin.” He said students need to vote in the November presidential election.

“If the wrong person is elected this fall, then the Second Amendment will be in jeopardy almost immediately because (with) one more liberal justice on the Supreme Court, you can say goodbye to the Second Amendment,” Falwell said. “ A 5-4, 6-3 liberal Court will transform this country into something that all the young people at Liberty won’t even recognize when they get my age. That’s the bottom line if they don’t vote.”

Falwell continued to emphasize the necessity of students to fulfill their responsibilities as Americans.

“It doesn’t matter if it’s Trump or Cruz or Rubio or whoever they support,” Falwell said. “I have my own personal opinion about who would be the best president, but students need to vote, and they need to vote whether they like the nominee of their particular party or not because there’s too much at stake for them to stay home.”