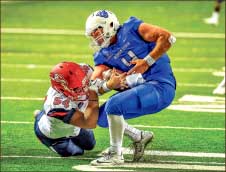 The Liberty Flames football team wrapped up its non-conference schedule Oct. 3 in the Georgia dome with a victory over Georgia State to give them a winning record, an FBS victory and
a much easier upcoming Big South schedule.

The Flames have had quite an eventful three weeks since playing West Virginia in Morgantown. Immediately following the loss to the Mountaineers, Liberty played arguably one of the biggest games in program history Sept. 19 in front of a record-setting crowd of 22,551.

No. 15 Liberty played No. 8 Montana in the first ever top-15 matchup in Williams Stadium history. Liberty jumped out to an early lead and never relinquished it as they beat the Grizzlies 31-21. The game was monumental for the Flames as they proved that they could win the big one.

After a big week at home, the Flames took off for their first of four straight road games. The Flames came into the game No. 10 against the unranked Southern Illinois Salukis. The Salukis scored 20 points before the Flames ever got on the board and the Flames never truly got back into it.

One of the lone bright spots for the Flames was redshirt-freshman wide receiver B.J. Farrow, who had eight catches for 101 yards. Sophomore Todd Macon also added his second road-
rushing touchdown, more than any other back on the team at the time.

The Flames eventually lost the game 34-13.

The contest was a back and forth one that saw the Flames surpass 500 yards offensively while possessing the ball almost three quarters of the game. Despite these numbers, the Flames did not put the game away until the Panthers last drive of the game with less than two minutes to play, when Flames redshirt-freshman defensive-back Chris Turner picked off Georgia State quarterback Nick Arbuckle. The final score was 41-33 in favor of the Flames.

“We’re heading in the right direction,” Coach Turner Gill said in the postgame press conference. “We got a good football program with great football players. We got a great coaching staff. I think everybody around the country can see that we can compete against anybody in the country.”

Lunsford had his best game of the season, going 2-2, including a 56-yarder with 2:27 to play in the game. While Lunsford’s season and career numbers are below average compared to the rest of the NCAA, he continues to impress with his abnormally strong leg.

“It was a good win for us,” Woodrum said in the postgame press conference. “Great for our team, great for Liberty and we are really excited going into conference play.”

The Flames first Big South matchup of the season will be on the road in North Carolina against the Gardner-Webb Runnin’ Bulldogs for their homecoming game.

Gardner-Webb enters the game with a 1-3 record. The team’s only victory came over Virginia Union, a Division II team.

The Flames look to prove that they can win the games they are supposed to win and not falter on the road against inferior FCS teams.

The Flames will kick-off in Boiling Springs at 7 pm, Oct. 10.

Schmieg is the asst. sports editor.