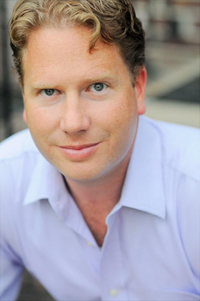 The defining moment of Andy Lyons’ (1996) career occurred right after he started working as the assistant city editor at The Post and Courier in Charleston, SC. “As soon as I got here, we got one of the biggest stories in the country,” Andy said.

He and his crew of writers at The Post and Courier won the 2008 Jesse Laventhol Prize for Deadline News Reporting by a Team. The award was presented by the American Society of Newspaper Editors (ASNE) at the annual national conference in Washington D. C. in April 2008. The coverage helped focus attention on regulations and procedures that were eventually changed.

The Post and Courier’s coverage of a devastating fire at a Charleston Sofa Super Store competed against the Washington Post’s coverage of the Virginia Tech Shootings, The Omaha World-Herald’s story on the December 2008 mass shooting at a Nebraska mall and nearly 500 other entries.

“It was a tragic time for a city, but a great time to be an editor,” Andy said.
The story was featured in the book, Best Newspaper Writing of 2008-09, which is used in the investigative reporting class at Liberty University.

Andy’s road to Charleston began his freshman year at the University of Delaware.

Andy lived in Newark, Delaware his whole life. He had two older brothers who graduated from Liberty University in 1988 and 1990, and his parents told him they would pay his way if he followed them.

But Andy decided to stay in Delaware and forge a different path by attending the University of Delaware. He biked to school every day but never got involved in the campus activities.

“I tried to be different (from my brothers), but I didn’t like it,” Andy said.
While at the University of Delaware, Andy took a creative writing course during which he was assigned to write a newspaper column.

He wrote on the minor league baseball teams in the neighboring city of Wilmington and “how much more pure it was than the major league.”

His mother secretly submitted the essay to The News Journal in Wilmington and it featured the article in a guest column on the Metro section. From then on, Andy was hooked on writing.

“I can’t tell you what it felt like that day,” Andy said.

After giving the University of Delaware a shot, he decided to follow his brothers down to Lynchburg. Liberty ended up being his “ticket out of Newark.” At Liberty, he started writing articles for the Liberty Champion.

After covering a story about a dry-cleaning business in DeMoss Hall that closed without returning clothes to students, Andy decided writing was what he wanted to pursue as a career.

“It was just that rush (that) solidified it,” Andy said.

“I got started late on taking college seriously,” Andy said.

Andy remembers his time at the Champion as instructive. He worked there for three semesters. The last semester of his junior year he was a writer, then senior year he was chosen news editor.

Andy said he enjoyed being news editor because he got to be “in charge of what news was on the front page.”

“What I’ve taken away from Liberty is really the Champion,” Andy said. “(There, I was) involved in every facet of the paper.”

Andy put off his internship until the summer after his senior year, when he worked for free at the Lynchburg News & Advance.

There, Andy worked hard to “get clips for the real world.”

Late that summer he got his first real job in journalism at a paper in Willoughby, Ohio with a circulation of 65,000.

During his two years at the paper, Andy gained valuable experience.

“Every city reached by the papers was so small. I covered like four city councils and two school boards,” Andy said. “It was helpful for learning to write and write fast.”

In the summer of 1998, Andy took a new job at The Daytona Beach News-Journal.
“Tons of stuff was going on … really crazy stories,” Andy said of the Daytona Beach environment.

One of those stories won him first place for feature reporting from the Mid-Florida Chapter of the Society of Professional Journalists in 2005. The story, “An Eternity of Waiting,” detailed the disappearance of Coleen Orsborn coinciding with the presence of a serial killer in Daytona Beach.

At the News-Journal he was promoted to bureau chief and was over six reporters and two photographers.

After spending eight years in Daytona Beach, the paper began falling into hard times and Andy took a similar position as assistant city editor at The Post and Courier in Charleston, S.C.

“It was a better paper and a better place to have kids,” Andy said of his move.

Charleston was where Andy was part of a team that covered the big fire story.

The story pushed The Post and Courier into the new era of emerging journalism.

Today things have changed. All reporters and editors are on Twitter and Facebook. And while The Post and Courier continues to compete with local TV stations, it collaborates with South Carolina newspapers outside of Charleston in sharing its stories and photos.

“I tell people I don’t work at a newspaper,” Andy said. “It’s really a media company.”

Less than a year after the fire at the Sofa Super Store, Andy fell into another dynamic story.

A family friend and member of Andy’ church named Ramey Reeves was diagnosed with a rare and aggressive form of brain cancer.

Andy met Ramey a decade earlier when he was writing for the Champion. At that time, he was writing an article on a Christian night club in Lynchburg where Ramey and her band were performing. He was struck by her “outgoing, infectious personality.”

In 2006 when Andy and his family moved up to Charleston, they went to a church and Ramey was quick to greet them. The Andy and the Reeves families became friends.

Ramey allowed Andy and his wife Renee (a freelance photographer) to follow her to Duke University where her first brain surgery was performed.

The Post and Courier featured Ramey’s story, “An Unshakable Faith,” on the front page of the March 28, 2008 edition.

“There is nothing like going out and writing a story about someone … telling an untold story,” Andy said. “She is involved in church, a really nice mom and her life is thrown for a loop. Her faith was truly tested, but she never lost sight of who was in charge.”

The web story and supplementary photo gallery drew a following and produced encouraging comments for Ramey and her family.

On July 9, 2008, Andy wrote an obituary, telling Ramey’s story, her life, her faith and the encouragement she provided for all who knew her.

“It was really difficult to write a feature on a friend and then also an obit,” Andy said.

The multi-media website allowed Charleston residents to interact with the story and provide opportunities for others to share their faith with the community.

“A lot of people came to church because that story ran in the paper,” Andy said.

Andy is still working at The Post and Courier, but now as metro editor. He and his wife of 14 years, Renee, have three children, Elijah, 11, Noah, 8 and Eloise, 6.

“I’m really a family man,” Andy said, “I like hanging out with my family.”

He also likes reading and running and is currently training for a half marathon.