A “Chip” off the old block 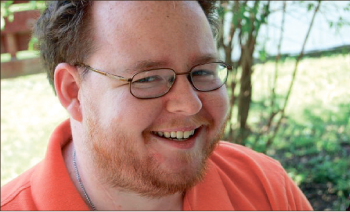 You can spot Chip’s smile from a mile away. His smile is followed by the greatest hug on campus. His smile and happy demeanor do not indicate that he suffers from three debilitating disorders. All smiles — Philip Glen Clark, a.k.a “Chip”, keeps a positive disposition in spite of years of health struggles. Photo provided

Cerebral Palsy, juvenile diabetes and epilepsy have met their match in Chip Clark.

The problem was Clark was not due to greet the world until September 12. He was born with cerebral palsy due to brain hemorrhaging. At birth, he weighed 2 pounds, 3 ounces. The doctor’s outlook on his survival was bleak. One of his doctors told his parents that if he survived, he would be a “Chip off the old block.” He has been known as Chip ever since.

Other doctors were less enthusiastic about his survival. They encouraged his parents to discontinue life support because they feared he would grow up in a vegetative state and would be blind. Needless to say, Chip’s parents didn’t listen. Rather than facing an untimely death, he spent the first three months of his life in an incubator fighting for his life.

Doctors had to place a shunt in his brain in order to help drain the fluid that caused the hemorrhage. A shunt is a marble looking device with a tube draining fluid out of the brain.

On August 23, 1998, Chip developed juvenile diabetes. Battling a lifelong illness and multiple surgeries caused his pancreas to stop working. In addition to all of this, Chip has had epilepsy since birth; epilepsy is a common side effect of cerebral palsy.

In spite of all of his illnesses, Chip attended school and did very well. He attended Pulaski County High School from 1997-2001. While in high school he was an active member of Students Against Drunk Driving, choir and was honored as the “choral student of the year” his senior year.

In April of 1999 Chip realized that his struggle with diabetes was never going to end. The word “insulin” dominated his life along with daily checks for blood sugar. One night he decided to take a double dose of insulin thinking he would go into a diabetic coma and never wake up. The attempt failed, however; during the attempt he had a dream that he watched his own funeral. The dream served as a wake up call.

After graduating from high school, Chip attended New River Community College and graduated with an Associates degree in general studies. From 2005-2007 he worked in his high school as a para-educator for a student with Aspegers Syndrome.

Chip decided to attend Liberty in 2005. His desire did not come to fruition until the fall of 2007.

Since beginning his undergraduate career, Chip has blessed his peers.

“Chip has a great heart, and his love for the Lord is always present,” senior Jamie Gephart said.

“Chip is one of the sweetest guys I know. He is a great example of a brother in Christ,” senior Carly Schneider said.

In May, he will graduate with a Bachelor’s degree in General Studies with a minor in special education. After graduation Chip plans to continue to help students with special needs maximize their full potential.

The average person who suffers from a disability, disease or disorder has to really wrestle with staying positive. After a few years, the endless doctors appointments, prescriptions and rounds of testing start to take a physical and emotional toll.

Chip’s college experience was different than most. He moved at a slower pace than his peers. During his sophomore year was rushed to Lynchburg General Hospital five times because his blood sugar was dangerously low.

Chip wrestled with his circumstances, but emerged victorious and has determined to live his life as joyously as possible.

Chip’s personal motto is, “The only thing that makes failure a fact is the personal decision I make inside my own heart to quit.”