Flames Football to face Coastal Carolina after all, at Saturday’s Cure Bowl in Orlando 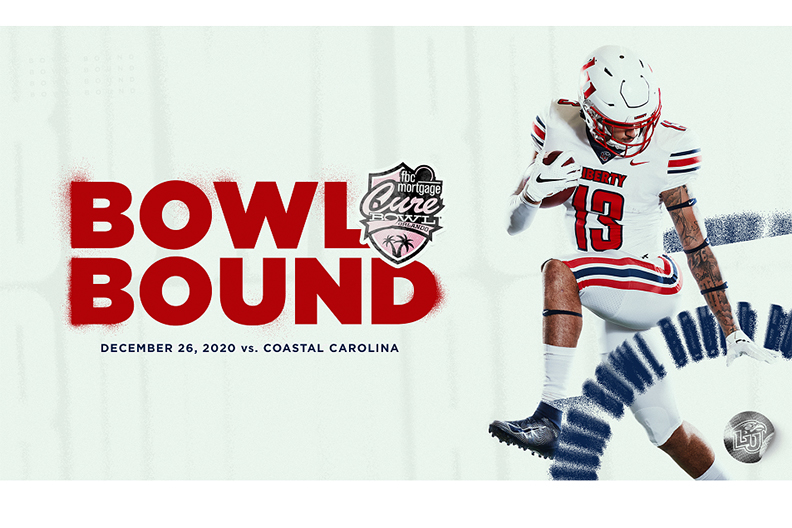 Liberty University’s football team, which landed at No. 23 in the final regular season Associated Press and Coaches Poll Top 25 national rankings, will look to cap off its best season in program history with a win over No. 9/11 Coastal Carolina in the 2020 FBC Mortgage Cure Bowl.

“We are excited to be heading back to the Cure Bowl and are thrilled with our matchup against a top-ranked opponent in Coastal Carolina,” Flames Head Coach Hugh Freeze said. “Alan Gooch and the entire Cure Bowl staff created a first-class experience for Liberty during last year’s Cure Bowl and we expect the same when we take to the field at Camping World Stadium. Having another chance to face Coastal Carolina after it was taken away from us at the end of our regular season gives us a chance to finish off a magical season with another special win for Flames Nation.”

Coastal Carolina is currently 11-0 on the season and is one of five remaining undefeated teams in the country. The Chanticleers, who posted an 8-0 record in Sun Belt play this season, were scheduled to face off against Louisiana in the Sun Belt Conference Championship game on Saturday, but the game was canceled due to COVID-19 issues within the Coastal Carolina program.

Liberty (9-1) and Coastal Carolina, former Big South Conference rivals, were scheduled to face each other during Liberty’s regular season finale on Dec. 5 at Brooks Stadium in Conway, S.C. however, the contest was canceled due to COVID-19 issues within the Liberty Football program.

“We are grateful to ESPN and the FBC Mortgage Cure Bowl for creating a Top 25 matchup between Liberty and Coastal Carolina,” Flames Director of Athletics Ian McCaw said. “This game features two of the fastest rising programs in the nation and it will be a treat for college football fans including Flames Nation. Based on last year’s experience, we know Alan Gooch and his team will afford the teams and fans first class hospitality.”

Last year, Liberty captured its first-ever bowl victory with a 23-16 win over Georgia Southern in the RBC Mortgage Cure Bowl on Dec. 21 at Exploria Stadium in Orlando, Fla. The Flames became the third team in NCAA history to win a bowl game during their first full season at the FBS level, finishing the year with an 8-5 overall record.

COVID-19 restrictions in Florida will allow for close to 5,000 fans to see this Saturday’s game live at Camping World Stadium, which has a seating capacity of 70,000.

Tickets for the Cure Bowl will go on sale Monday, Dec. 21, at 10 a.m. through the Cure Bowl website. To purchase in the Liberty sections, Flames fans should use the ticket link that can be found at www.libertyflames.com/bowlcentral.

“We are honored to welcome Coastal Carolina and welcome back last year’s Cure Bowl Champion Liberty to the FBC Mortgage Cure Bowl,” FBC Mortgage Cure Bowl Executive Director Alan Gooch said. “This is the Cure Bowl’s first ranked match up in our six-year history. This a great match up, and in six days we will get to see these two great teams battle it out at Camping World Stadium. The match up takes the bowl to another level, however, the Cure Bowl’s mission of bringing teams together to find a cure for cancer always remains the same.”

The FBC Mortgage Cure Bowl is a platform to help raise funds for the Breast Cancer Research Foundation (BCRF). Since 2015, the bowl has raised a collective $3.8 million.