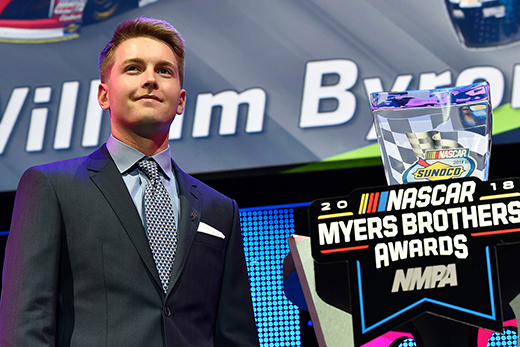 William Byron, driver of the Liberty University No. 24 Chevrolet Camaro ZL1 in the NASCAR Cup Series, officially accepted the Sunoco Rookie of the Year award at the NASCAR NMPA Myers Brothers 2018 Awards in Las Vegas on Wednesday. The event is part of the annual Champion’s Week activities and honors those who have made outstanding contributions to NASCAR.

At age 20, Byron became the third-youngest driver to win NASCAR Cup Series Rookie of the Year honors. (He turned 21 on Thursday, Nov. 29.) The No. 24 team secured four top-10 finishes, leading 61 laps along the way and ultimately finishing 23rd in points.

Byron, who is pursuing a degree in business communication through Liberty’s online program, has now won Rookie of the Year honors in four straight racing seasons, following the Xfinity Series, Camping World Truck Series, and the K&N Pro Series East. He is only the second driver to sweep the honors in the Xfinity, Truck, and Cup Series in consecutive seasons. 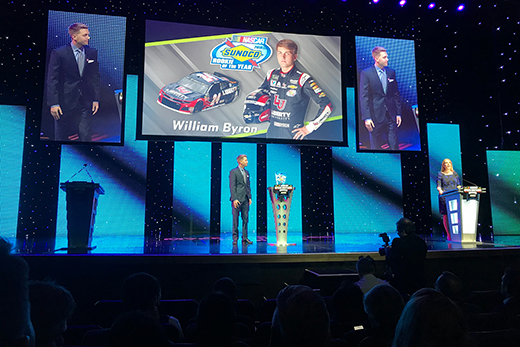 “This was a goal of ours, and I’m thankful for all the work that went into getting us to this point,” Byron said in his acceptance speech. “As we set out for 2018, I couldn’t wait to live a dream of mine by competing in the Cup Series.”

He called the whole experience “surreal.”

“From driving the No. 24 Flames car at Daytona, to racing at my hometown in May, it was surreal,” Byron said. “You go from running at the quarter-mile track at Charlotte four years ago to racing in front of tens of thousands of people.”

“As I look toward next year, I’m excited and ready to get going,” said Byron, who will join seven-time Cup Series champion crew chief Chad Knaus. “No more rookie meetings, and that’s a freedom I haven’t had in my short NASCAR career thus far. With that being said, I’m ready to take those rookie stripes off.”

Liberty will remain a primary sponsor again in 2019 (view the schedule below).