For 88-year-old Judith Rosenzweig, her story is one of survival. As a teenager living in Czechoslovakia, she experienced Nazi cruelty against the Jewish people firsthand. Along with her family, she was deported to the Jewish ghetto in Theresienstadt and from there was sent to the Auschwitz concentration camp. Only Rosenzweig, her sister, and her brother survived.

For Liberty University students Jared Brim and Timothy Moraski, Rosenzweig’s story is one that will stick with them for the rest of their lives.

The students interviewed Rosenzweig as a part of a 40-minute documentary, “Remember,” which they filmed while visiting Israel over Thanksgiving Break. Their trip was taken through LU Send, the university’s travel office that handles opportunities for students, faculty, and staff to travel domestically or internationally.

Their documentary is now part of the digital collection at the Visual Center at Yad Vashem Library in Jerusalem, the world’s most comprehensive collection of published material about the Holocaust.

“When you learn about the Holocaust from a textbook, I think you see it as facts, numbers, and something you study for about a week in high school to take a test on,” said Moraski, who visited the nearby Yad Vashem: The World Holocaust Remembrance Center, the largest museum on the Holocaust. “But when you talk to a person who survived it or see the museum, it becomes about real people, real lives. When it’s put outside of a statistic and a number, it just becomes so real.”

“After working on the project, it made me feel like the Holocaust was a fairly recent event,” Brim added. “It was really special to hear from someone who was there, like Judith, rather than only from a historian.”

Brim and Moraski also interviewed representatives from the International Christian Embassy in Jerusalem, the Helping Hand Coalition, and the Jerusalem Institute of Justice. 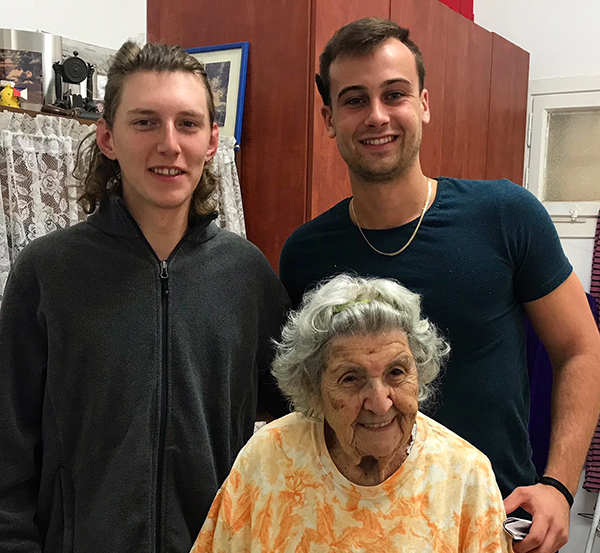 Brim said he was surprised to hear how open Rosenzweig was to recounting this tragic part of her childhood, and he learned how important it is to preserve survivors’ stories.

“The Holocaust was such an important part of world history that affected so many people,” he said. “The survivors want to tell their stories and experiences, especially since people are starting to deny that the Holocaust happened.”

Moraski said he was most affected by the experience when he heard about the hatred that fueled the Holocaust.

“It was a shock,” he said. “To this day, she was like, ‘We didn’t do anything wrong. They hated us for no reason.’ If you think about it, that’s such an extreme, awful thing that you hate someone so much to decide to have this mass genocide.”

Both students were honored to have their project become part of the library’s collection.

“This was a type of service,” Brim said. “I always thought service meant you had to be a missionary. But this was a chance to (use our gifts), to make a film that will have an impact.”

Moraski said he is blessed to have opportunities like LU Send, which allows students to experience new cultures and meet people they might have never been able to meet in the United States.

“I love that at Liberty, not only can you study abroad, but you have one- or two-week opportunities to travel,” he said. “It just shows how invested Liberty is in their students and in giving them these cultural opportunities. While we’re in these countries, we’re not just touring. It shows us how they’re investing in us to become immersed in a culture while learning.”