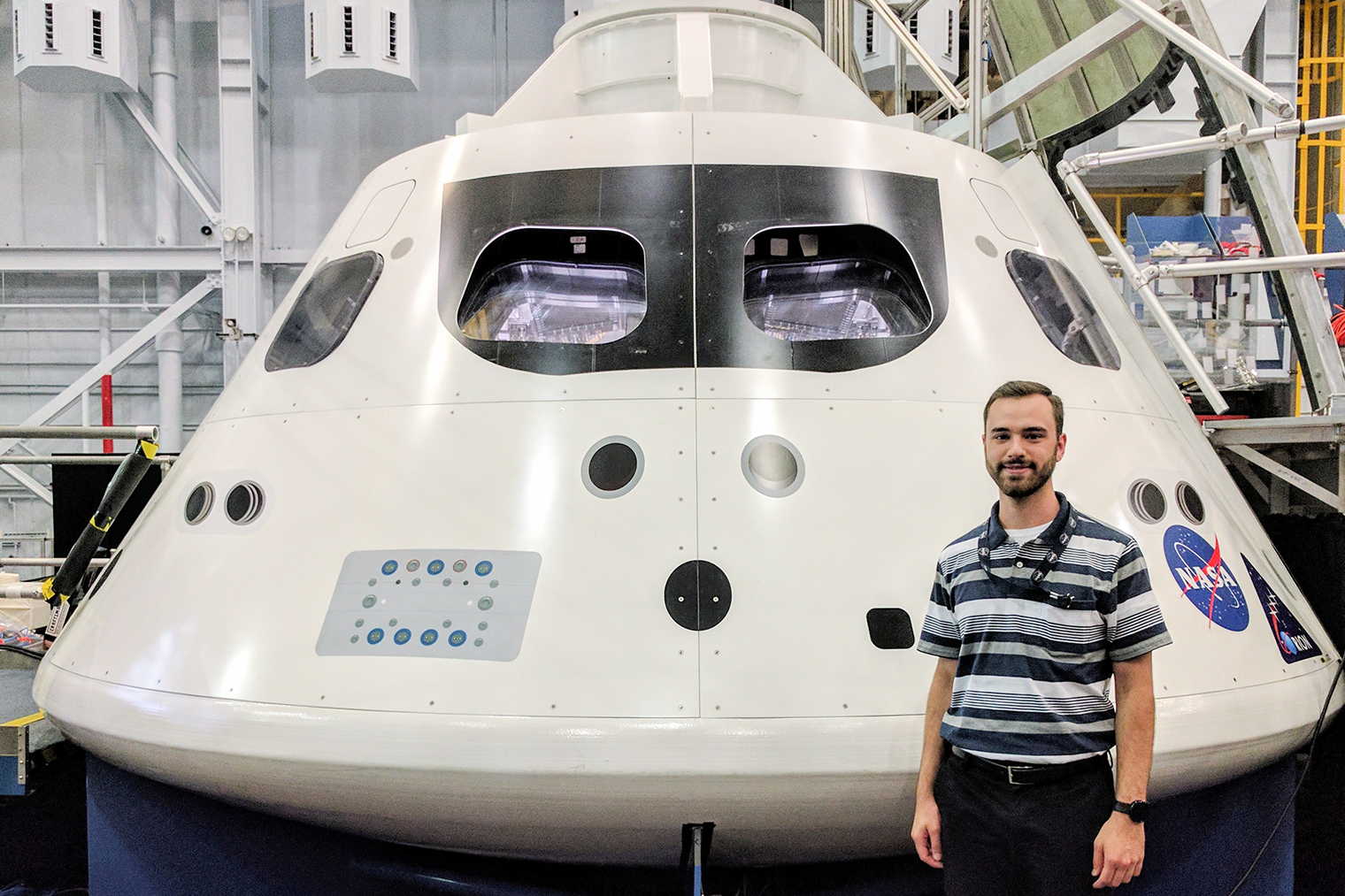 As the nation works toward sending its first manned mission into deep space, hoping to ultimately step foot on our distant neighbor, Mars, some of the brightest minds in the world are coming together to ensure the safety of the lives at stake.

This summer, Liberty University computer engineering student Matthew Russell, a rising senior, has been a part of that group. He is currently interning at NASA’s Johnson Space Center in Houston, working with the spacecraft software development team as it supports the forthcoming Orion Ascent Abort 2 mission, an unmanned launch slated for 2019. Russell’s team is also testing the spacecraft’s emergency launch abort system in preparation for a manned Orion mission around the moon in 2021.

“This is one thing that I really enjoy about working at NASA: how you can trace everything back to the end goals,” Russell said. “No matter how small the piece of the project is that I am working on, I can directly trace that to the mission that we are going to launch in 2019 for the Launch Abort System, which is basically going to show that the system is ready for manned flight and will lead to Exploration Mission 2 (in 2021) when we get people back into space and around the moon.”

Gaining experience with NASA-related technology will help Russell as he considers a career in the aerospace industry. But this internship is not the only striking thing about his résumé. Russell has landed other impressive internships over the past two summers.

After his freshman year, Russell interned at the University of North Dakota, developing software for UND’s OpenOrbiter nanosatellite program. His work has been published in the International Journal of Computers and Applications. After his sophomore year, he interned with the Air Force Institute of Technology (AFIT) Center for Cyberspace Research in Ohio. AFIT serves as the graduate school for the Air Force.

“I was able to develop some computer models that were going to help simulate a new type of quantum cryptography system,” Russell said of the AFIT internship, explaining that quantum cryptography involves the use of individual photons of light to create a secure password generation system for communications. His models have future applications in areas requiring the highest level of security, including government, military, and banking. Russell compiled a poster presentation of his research, which was shared at the annual QCrypt Conference last fall. That research is also being published in a conference paper.

Russell said it hasn’t been easy to take on a massive workload during the summers, nor has it been easy moving from place to place — from his home in Kentucky to Liberty’s campus in Lynchburg, Va., and the various locations of his internships — but he has had opportunities to do what he loves, and that makes it worth it.

“Looking back at all the internships — I wonder how in the world I even got here,” he added. “It is not like I set out (to do this) in high school. It is a process that I don’t think I could have orchestrated myself. Looking back, it is pretty much an example of the ways that God is working.”

Russell is considering taking next summer off before pursuing graduate school. He is thankful for his decision to choose Liberty, especially because of the spiritual growth he has experienced. When he thinks of the places that he has been, and will go in the future, Russell points it all back to God, who is using him for a greater purpose. Russell knows he is not perfect, but he is striving to be a light for truth through his work.

“God reminds me, ‘I am blessing you with these opportunities that could take you to some interesting places, and make sure you are thinking of the responsibility that it is to be in these places,’” Russell said. “‘You are getting the chance to talk to people who may not have ever met someone like you who is able to — hopefully — do good engineering work but is also a solid Christian, an intelligent person who can give a reason for why they believe what they believe.’”