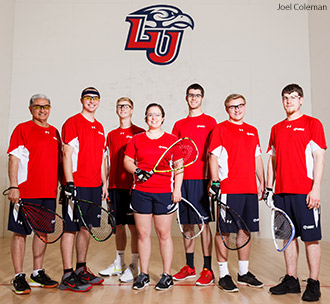 Five players and two coaches from Liberty University’s third-year racquetball team flew to Tempe, Ariz., on Monday to compete for the first time in the USA National InterCollegiate Championships, Wednesday through Saturday at Arizona State University.

“We don’t know what to expect, but our guys are pretty good and we’re hoping they can place,” said Liberty Head Coach Danny Rodriguez, who was selected with assistant coach Shawn Furman as the Mid-Atlantic Collegiate Racquetball Conference (MACRC) co-Coaches of the Year.

“Our coaching staff is remarkable, the way they can teach a beginner to play at a high level in a short period of time,” said Schreck, who moved up from Division 3 last season after first playing competitively as a sophomore. “It will definitely be tough … (but) the thing about racquetball, by the time you get to the Division I skill level, any match is anyone’s game. I’m confident I can compete.”