Liberty University President Jerry Falwell, accompanied by his son, Trey, and Director of Planning & Construction Charles Spence on Tuesday, took the first test drive through the university’s new vehicular tunnel, which will be open to traffic May 9, in time for Commencement weekend.

Not only will the vehicular tunnel improve traffic flow on campus, it will increase safety by replacing an at-grade railway crossing, currently the primary way for vehicles to access Wards Road, a retail corridor. The tunnel will have four lanes for traffic, two each way, and include pedestrian walkways. From campus, the tunnel will exit to the intersection of Wards Road and Harvard Street. While the tunnel is a Liberty University project, the City of Lynchburg will partner with it to improve the intersection and existing traffic light.

The tunneling method Liberty is using has never been done in North America. The project has garnered interest in the industry and has been covered by the American Society of Civil Engineers and Tunnel Business Magazine. (Read more about the project in the Liberty Journal.)

The tunnel is part of Liberty’s $500 million campus rebuilding. Included in the plans — in addition to new residence halls and academic buildings — are upgrades to improve traffic flow and safety. Liberty is currently working to better the roads on campus, especially Regents Parkway, the perimeter road, as well as add sidewalks. The university is also constructing a 1,400-space parking garage behind the university’s Hill Residence Halls, right next to the site of a the new softball stadium, also under construction. This, along with the expansion of the baseball stadium parking lot, will greatly alleviate parking challenges on campus. Upgrades to some roads on East Campus are in the works as well.

Spence said the goal is for traffic to be contained more along the perimeter of campus so that its heart will be less cluttered and friendlier to pedestrians and cyclists.

Though the tunnel will be functional for graduation, the finishing touches, including landscaping, won’t be complete until August. The parking garage and perimeter road improvements should all be ready to accommodate students when they return for the Fall 2014 semester. 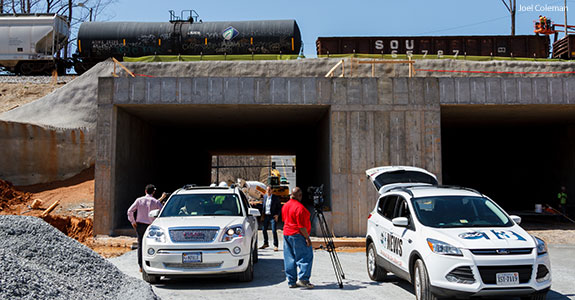