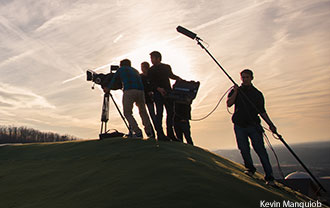 Equipped with the latest, cutting-edge filmmaking technology and in partnership with EchoLight Studios, a world-class Christian film studio, the Cinematic Arts program at Liberty University is prepared to become a major force in the filmmaking industry.

Liberty announced plans to form a film school in May 2011 with the mission of training the next generation of filmmakers in a Christian environment. A dedication and film festival was held in Fall 2012 to celebrate the first full academic year.

The program offers a two-year, full-immersion cohort experience for students in their junior and senior years and has already exceeded enrollment goals.

“For the first time in history, we see the world’s largest Christian university equip students called to the cinematic arts with state-of-the-art tools and resources.”

The bridge between his company and the university, Downes said, is “an investment in the future great artists we’ll see affect culture and society over the next decade. History is a showcase of storytellers’ tremendous impact on society.”

Alex Kendrick, a pioneer of the Christian film industry and director of “Courageous,” “Facing the Giants,” and “Fireproof” (the highest-grossing independent film of 2008), said the agreement propels an already promising program.

“Christians want to create meaningful entertainment, and there’s no shortage of families hungry for those movies,” Kendrick said. “Liberty’s Cinematic Arts Center was made for a time such as this, to train and guide the next generation of storytellers using film. EchoLight Studios’ commitment to finance and provide leadership will help Liberty students fulfill the Great Commission.”

So unique and attractive is the relationship with EchoLight, Schultze said, that he expects to see more industry professionals like Kendrick step in, wanting to give back as teachers, mentors, and advisers.

As Liberty embarks on this venture, EchoLight is a perfect partner. Based in Dallas, Texas, it formed in 2011 and has been groundbreaking in its own right, paving the way to make more quality movies for families of faith.

In 2012, EchoLight began releasing one movie per month, including Josh McDowell’s “Undaunted,” Mike Norris’ (son of Chuck Norris) “I Am Gabriel,” and Corbin Bernsen’s “25 Hill” and “3 Day Test.”

“The Potential Inside,” an award-winning film produced and directed by Scotty Curlee, assistant professor of cinematic arts at Liberty and a Liberty alumnus, will also be released by EchoLight in 2013.

Christopher Morrow, EchoLight’s chief global strategist and co-founder, said the firm was formed “to do it all — to finance, produce, and distribute — to reach people in all the ways they watch movies wherever they are in the world.”

Their mission aligns with Liberty’s vision: to Train Champions for Christ and give them a solid platform to take their message worldwide.

Young filmmakers are learning to break down and analyze films, to create and write screenplays, and to master all technical aspects of filmmaking through the school’s “learn by doing” approach.

“We’re seeing a one-of-a-kind incubator for the next generation of Christian filmmakers,” Schultze said. “What a time, what an open door to turn life-changing stories into life-changing films.”

“Liberty is inviting potential filmmakers to ‘change chairs,’” Schultze said. “This is a real opportunity for film fans to get out of their theater seats and into the director’s chair. The real winners will be millions of audience members longing for high-quality films that reflect their values.”