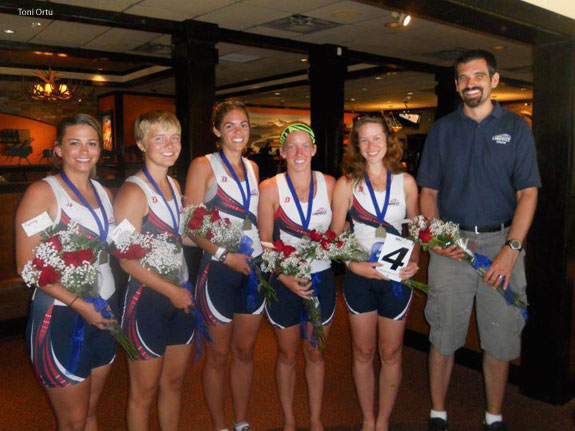 Liberty University Crew garnered its first national championship in its first appearance at the American Collegiate Rowing Association National Championships on Lake Lanier in Gainesville, Ga., on Sunday, May 27.

Abigail Lenz, Lindsey Churchill, Brianna O'Neal and graduating seniors Amy McGowan and Toni Ortu (coxswain) finished the 2000 meter course in 7:43.9 to win the women's varsity lightweight four race by about 17 seconds over the University of Chicago, with Penn State finishing in third another 11 seconds in arrears.

"It was a great win," Ortu said. "This is my final race forever; I couldn't think of a better way to end a season or my rowing career."

The plan for the race was pretty simple for the team, after taking first in a practice race on Saturday.

"Our plan was to be quick off the line from the beginning and crank up the power every 500 meters (at the intermediate splits)," Ortu said.  "We really turned up the power at the second half of the race."

McGowan said the team put forth its best effort.

"From the beginning, we were shaking because of our nerves at the practice race on Saturday, I don't think I've pulled that hard in my entire life. To have the support of the entire team there, and to push harder than I ever have before, I wouldn't have wanted to end the season any other way," McGowan said.

This is the second national championship for Liberty's Club Sports this year, after the wrestling team picked up a win in the NCWA National Duals in nearby Dalton, Ga., in January.

In other crew action, the men's varsity four finished fourth in the D-final while the women's novice four finished third in the B-final, good for ninth place overall.

This was Liberty Crew's third full season to compete as a team.