Focus on the Family leader speaks at convocation 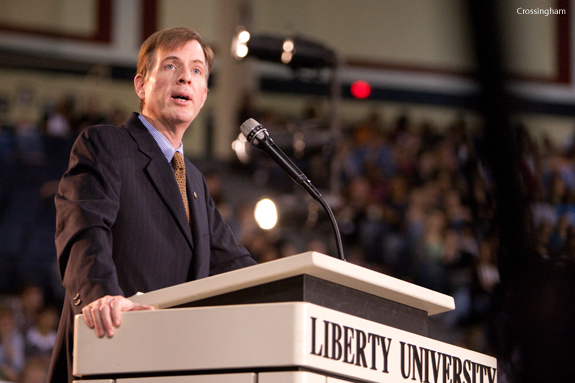 Tim Goeglein, vice president of Focus on the Family, spoke at Liberty University’s convocation in the Vines Center Monday morning.

Upon graduating from Indiana University-Bloomington, Goeglein was recruited to intern for then-Sen. Dan Quayle of Indiana in Washington, D.C., which led him into 21 years of public service. He was press secretary to then-Sen. Dan Coats, also of Indiana, in the late 1980s. Later, he joined the Gary Bauer presidential campaign, helping him seek the Republican nomination. When Bauer pulled out of the race in early 2000, Goeglein was recruited to work for the George W. Bush campaign at its Austin, Texas, headquarters.

On Jan. 21, 2001, Goeglein was sworn in as deputy director of the White House Office of Public Liaison. His career would take a slightly different path eight years later, as he was hired by Focus on the Family as its top Washington, D.C., lobbyist and spokesman.

Goeglein opened his talk on Monday morning by recalling the first time he met Liberty University founder Dr. Jerry Falwell and hearing his vision to “take America back for Christ.” He honored Falwell, calling him “one of the greatest Americans who ever lived.”

Goeglein spoke about the importance of making an impact in the government and media in this country. He encouraged students to spend at least a part of their lives in public service, explaining how desperately our country needs Christians in the political arena.

“Christians are lacking in the cultural sphere of this country,” he said.

He challenged Liberty students to step up and make a mark in this world when they graduate.

He closed by encouraging students to continue to seek to make a difference even when it seems hard. He said that we can have confidence and be encouraged, “because I know that my Redeemer lives.”