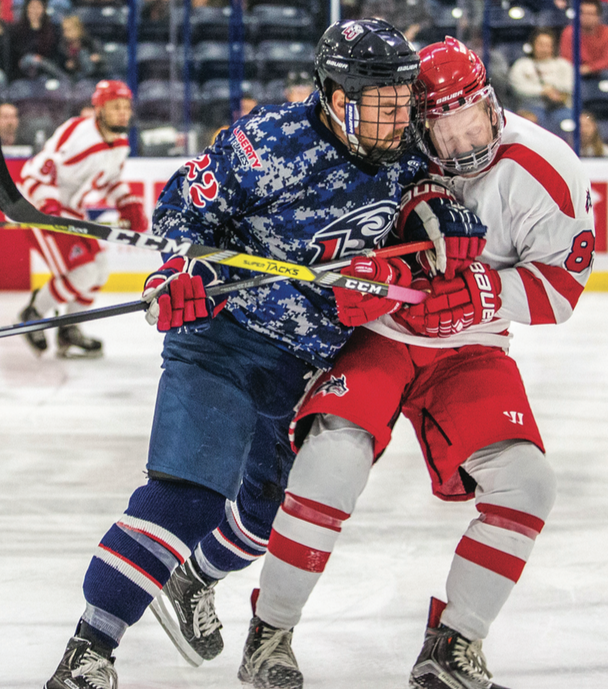 Hockey takes one against Seawolves

Liberty University’s Division I mens hockey team rallied back to win in a shootout 3-2 Nov. 4 against the Stony Brook Seawolves at the LaHaye Ice Center.

The win moved the Flames to 5-1 in the Eastern States Collegiate Hockey League and 9-4-0 overall. The Seawolves dropped to 6-5-1 and 4-2 in ESCHL play.

“That’s a good team over there,” Liberty Head Coach Kirk Handy said. “I thought both teams battled hard tonight. We knew it was going to be a close game.”

The first period saw both teams held scoreless by solid defense, but it took just 50 seconds into the second period for Seawolves’ senior forward J.T. Hall to find an opening in the Liberty defense and net a goal through the five hole of Liberty sophomore goalie Blake Scott to put Stony Brook up 1-0. 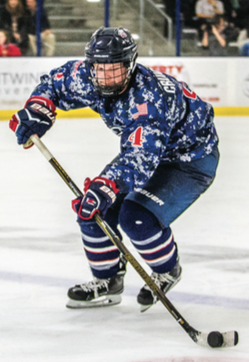 The Seawolves carried that 1-0 lead into the third period.

“We’re just thinking, ‘Don’t panic,’” Liberty freshman forward Andy Clarke said. “We’ve been in this position before at Rhode Island a few weeks ago down heading into the third, so we knew that if we just stuck together, played our system, and didn’t get frustrated that we could come
out on top.”

Clarke kept his composure to collect his second goal of the season when he smacked a shot from the blue line that got pass Stony Brook freshman goalie Brandon Rathwell to tie the game at one each.

But the celebration was short-lived for the Flames as Stony Brook skated to the other end just 47 seconds later and regained the lead when Stony Brook junior defenseman Frank Sherding crossed the puck to Hall in position to score his second goal of the game with 11:49 left in regulation.

“That’s something you don’t want to do,” Handy said. “But that’s the game of hockey. The college game is an emotional game. It’s one we don’t want to give up, but we had to move on from there.”

The Flames moved on 53 seconds later after leading scorer and senior forward Grant Garvin tipped in the puck off a shot from Liberty senior defenseman Zane Schartz to knot the game at 2-2.

With only 2:52 left in the third, Stony Brook looked to net a late-game dagger, but referees waved the goal off on a goalie interference call on the play.

Regulation ended with the score tied 2-2.

Each team was kept in check in the five-minute overtime forcing the game into the first shootout since the rink reopened from the renovations in Oct. 2015, according to the News & Advance.

“On the bench I looked right at coach and told him, ‘I want first,’” sophomore forward Owen
Harris said.

Harris took the first shot for Liberty in the shootout and backhanded the puck through the five hole of Rathwell.

“To be put in that position to help my team succeed was unbelievable, and to come through was an amazing feeling,” Harris said.

Scott on the other end stiffed each of the Seawolves shots and after the last, the Flames rushed the ice to celebrate their victory with him.

“I’m just proud of our guys for sticking with it,” Handy said. “Down one-nothing going into the third, with a young team, it’s something you love to see. That battle mentality — it was a (really) encouraging win for us tonight.”

The men’s Division I hockey team (8-4) fell short to the Stony Brook Seawolves (6-6) Saturday, Nov. 5 at the LaHaye Ice Center by a final score of 4-5 on military
appreciation night.

After Friday night’s shootout victory against the Seawolves, the Flames were off to a slow start that set the tone for their Saturday rematch. In the first two periods, they made a total of 17 shots, while Stony Brook made 27.

“A slow start really hurt us tonight,” Handy said. “We didn’t come ready to play in the first period, and that was a big negative for us tonight. We are a young team, and we will learn from this game to be better moving forward.”

“I knew I had to own the top of the crease, establish my position and make myself as big as I could,” Scott said. “We got the puck up to our wingers as quickly as we could. Our first pass out of the zone is what made the difference in the game.”

Fourteen minutes into the first period, Stony Brook forward Joe Bochichio tipped the puck past Scott from the right side of the goal with assistance from defender Frank Sherding and forward Brendan Calello. 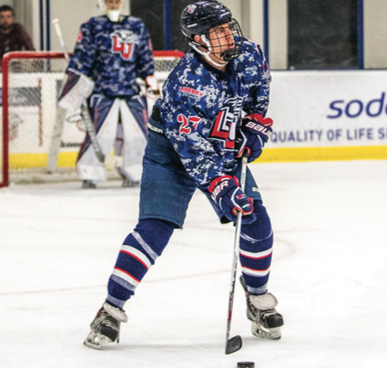 “Stony Brook is a tough opponent,” sophomore forward Marshal King said. “We were coming off a win last night, so we got over-excited. Overall, we had a great game, but we weren’t in it those first few minutes, and we didn’t protect Blake Scott like we should have.”

With two minutes left in the first period, King sent the puck up the right side of the rink to Reynolds who shot into the left corner of the goal, pushing the skill level and energy of Stony Brook goalkeeper Tyler Huberty. However, Crocket returned the favor with a Stony Brook goal that made the score 2-1 at the end of the first period.

“One of our main goals is to put pucks on net, and it just didn’t happen enough tonight,” Handy said. “We just didn’t execute the game plan tonight.”

Throughout the second period, the Flames attempted to placate Stony Brook’s offense, but the period ended with a two-point advantage for the visiting team.

“We just need to have more awareness,” Scott said. “We need to clear the pucks out of the zone and keep going.”

Four minutes into the third period, Liberty took advantage of a power play and brought energy back into the offense. Reynolds sent the puck to Schartz, who shot straight into the goal.

“In the third period, we tried to get back to the simple plays,” King said. “It was desperation really. We were desperate and behind and that’s how you need to play. We needed that in the beginning to win a game like this. Third period, we got our way back, just not enough.”

The Flames will take on the University of Delaware Blue Hens Nov. 11 at 7 p.m. in the LaHaye Ice Center.

Collier and Ball are sports reporters.