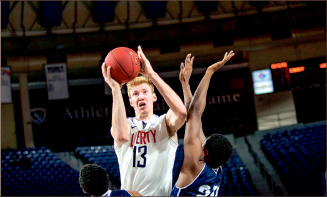 In the second matchup between these two teams this season, Longwood wasted little time getting on the scoreboard when junior guard Leron Fisher nailed a wide-open shot from behind the arc in the opening minute, giving the Lancers the early 3-0 lead. However, the Flames notched two points after junior forward Theo Johnson drove baseline for a quick layup.

After a Longwood turnover, junior forward David Andoh hit a mid-range jump shot over a defender’s outstretched hand, giving the Flames the 4-3 lead.
However, the Flames one-point lead lasted only 10 seconds after junior guard Shaquille Johnson knocked down another three-ball for the Lancers, giving them the lead. The Flames never gained that lead back.

After a Theo Johnson miss, Longwood looked to increase its lead. However, the Flames forced a turnover, but then turned the ball over themselves, leading to an easy layup for Fisher.

The Flames quickly ended their scoring drought after senior forward Andrew Smith hit a baseline jumper for his first basket of the night, making the score 8-6 in Longwood’s favor with 16 minutes left in the first half.

But in the Lancer’s very next possession, freshman Ryan Badowski, who is shooting around 40 percent from behind the arc according to longwoodlancers.com, spotted up for an uncontested three-ball, increasing the lead to five.

After Shaquille Johnson made a pair of free throws, Flames freshman guard A.C. Reid sank his 25th three pointer of the season.

Longwood quickly responded with a layup from sophomore guard Darrion Allen, but Reid responded too as he cut the lead down to three with another long ball, his second on the night.

Unfortunately for the Flames, senior guard Quincy Taylor, who shoots the 14th best three-point percentage in the nation according to espn.com, did what he had done all season. He knocked down a three pointer of his own, giving Longwood the 18-12 lead with 12 minutes remaining in the first half.

In the Flames next possession, Andoh missed a contested layup, which Taylor rebounded. He found Shaquille Johnson streaking down the sideline, who then rose up for the emphatic fast-break slam.

Just as most teams have done against the Flames this season, the boys from Farmville, Virginia, went on a devastating run to end the half. But the main perpetrator was not Shaquille Johnson. Instead, Fisher was the culprit.

“(Fisher’s) a good shooter,” Layer said. “He’s a good player. We could not guard Taylor off the bounce, which allowed (Fisher) to get open looks.”

In the remaining 10 minutes of the half, Fisher either scored or assisted on more than half of the Lancers points. But he also hurt the Flames in ways that the statistic sheet cannot indicate. He constantly penetrated the Flames defense, causing the Flames to scramble and provide help defense. Quality ball movement from Longwood allowed them to usually find someone open.

“We didn’t guard the bounce very well and we overhelped,” Layer said. “When you don’t guard the bounce, they drew help and had open shooters as a result.”
At the end of the first half, Liberty was down 13, having only scored 26 points in 20 minutes.

The second half began and the Flames looked to cut into their deficit, but only got it as low as 11.

After a pair of free throws from Theo Johnson cut Longwood’s lead to 11, Taylor buried another three-pointer, igniting a 9-2 Lancers run and increasing their lead to 20 with 12 minutes left.

Despite the 20-point hole, the Flames fought back.

“We guarded a little bit better,” Layer said. “We started getting to the free-throw line and attacking the basket.”

Theo Johnson and Liberty rushed the Lancers with an 11-2 run, but the Flames were still down by double digits with around four minutes remaining.

Ultimately, the Flames could not recover, as the Lancers came out victorious for their first win in the Vines Center.

The Flames also fell on the road to the Charleston Southern Cavaliers, 77-67, Feb. 21. Junior guard Joe Retic returned to the court after being sidelined for 12 games with a foot injury. He saw 14 minutes on the court and notched two points. With the loss, the Flames fell to 7-22 overall and 1-15 in conference play.